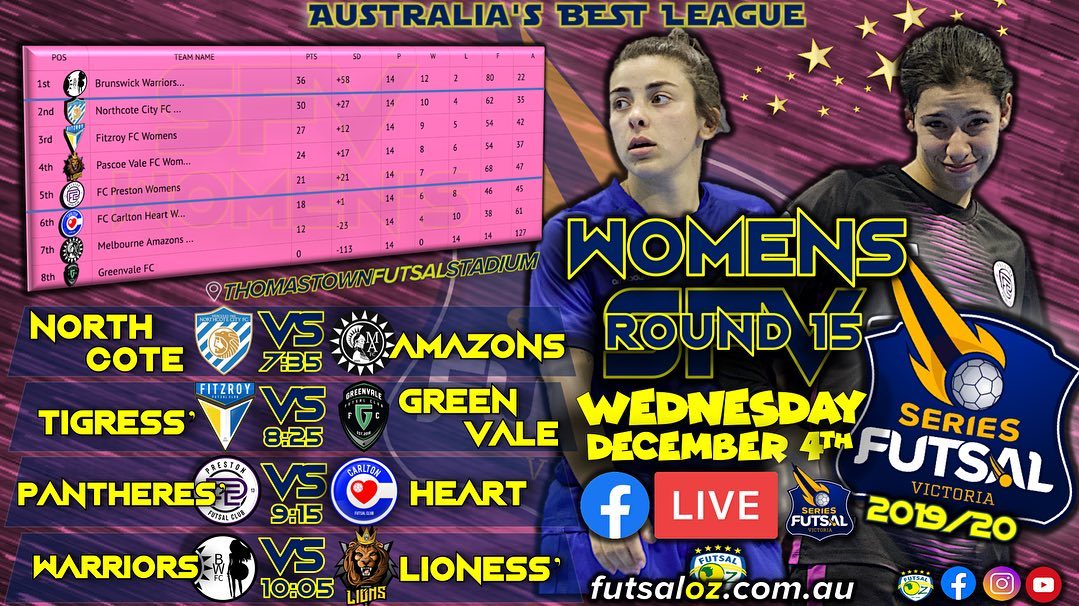 The opening game of the night saw Northcote City take on Melbourne Amazons as Northcote looked to continue their slim push for the title, while Amazons were seeking to end their season with some momentum. A tight first half saw Northcote edge the scoring with a Melissa Garcia brace and a single from a Deidre Bugraaf own goal gave them a two goal cushion, while an Alycia Eicke strike kept the Amazons within touching distance.

Northcote showed their class in the second half as they added a further three goals to no reply, with star player Camila Fresneda completing a second half brace, while another to Melissa Garcia saw her complete her hat trick in a convincing win for Northcote.

Next up saw third placed Fitzroy face bottom of the table Greenvale. It was expected to be a one sided affair and Fitzroy had put the game to bed by half time as they piled on eight goals to no reply with both Ili Jakab & Romy Heasly recording hat trick to take their side into the break with a big lead.

The second half only got worse for Greenvale as Em Coppock added nine second half goals to finish with a game high, while Ili Jakab struck four more times to bring her tally up to seven. Romy Heasly would find the net on two more occasions as Fitzroy recorded a massive twenty three goal win.

Next up saw a big clash take centre stage as Preston faced Carlton. A strange first half saw Carlton race out to a 3-1 lead thanks to a Rebecca Davies strike which was coupled with two gown goals off Steph Galea and Dharma Georgi to have Carlton ahead, while an Armina Sherifi strike kept Preston in the game. Soon after Taylor Halabi would pull one back for Preston to keep them in it, and were level when Steph Galea struck to tie the game at three at the half time break.

Carlton looked to be at the top of their game this evening as Davies struck for a second time, before another Galea own goal extended the deficit, while Galea would also strike in her own net to set up a grand stand finish. Jessica Au would net late on to kill off any chance of a Preston come back as the Heart put on a top class display to record a much needed win.

The final game of the evening saw league leaders Brunswick Warriors take on Pascoe Vale. always a tight contest there would only be one first half goal as Cristina Fonua struck to give the Warriors a slender lead at the half time break.

The second half saw Brunswick turn up their game and Pascoe Vale get frustrated and the result told the story as five unanswered second half goals were too much for the Lions with Monica Fonua netting twice, supported by goals from Daniella Galluccio, Lisa Fonua and a Liesl Woods own goal to see the would be champs return to the winners list.