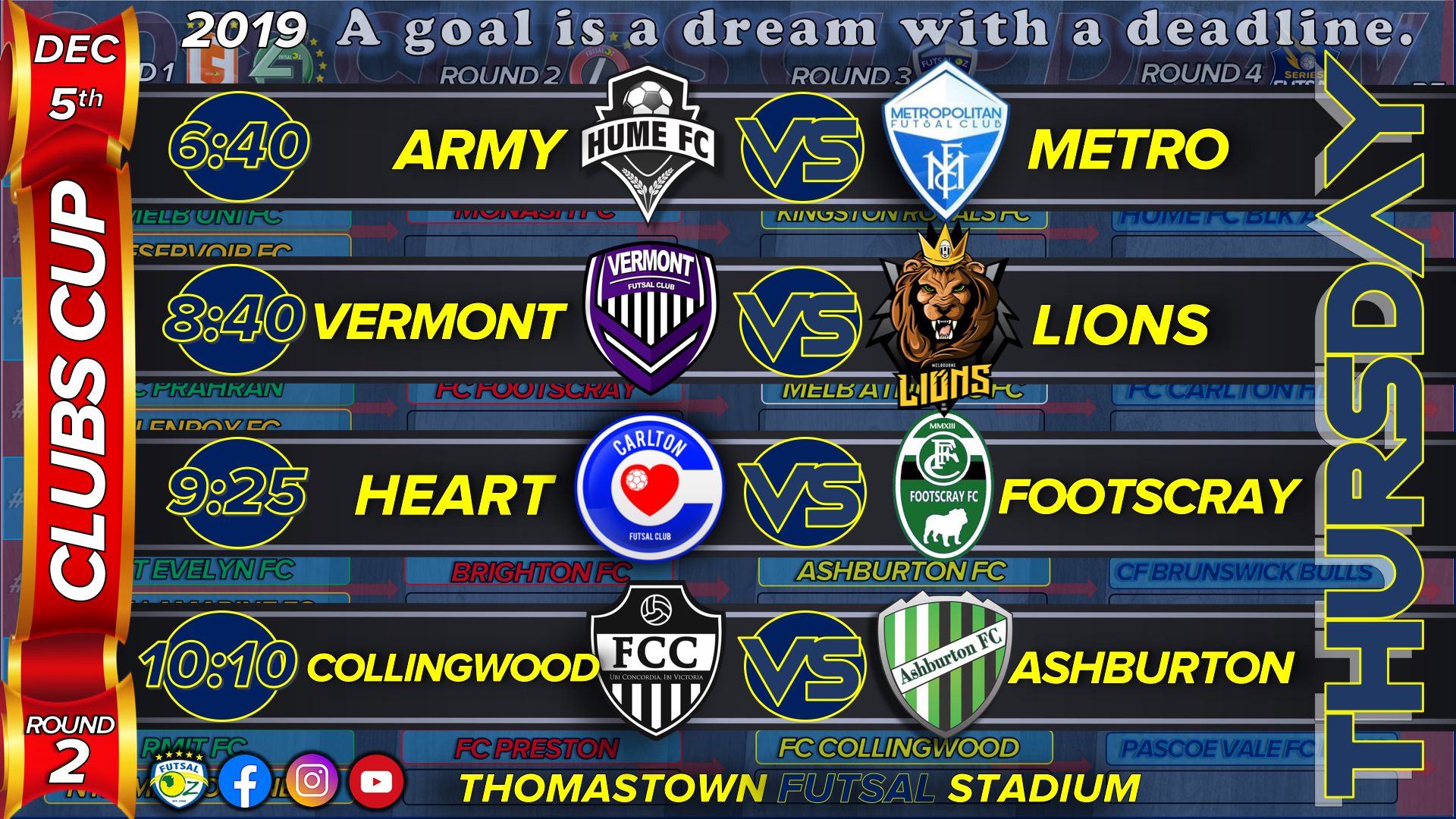 The opening clash of round two saw Hume take on Metropolitan in an all State League Championship affair to progress to the final eight. Early on it was Hume who took the lead early as shot stopper Kerim Koc struck a stunner from range to give his side the lead, though his feat was matched with a bit of class from Dino Redzepovic as he tapped home to make it one a piece. Metropolitan then took the lead for the first time with Alija Redzepovic firing home, but Hume would have an answer for that one with Resit Culculoglu taping home at the back post to tie the game at two at the break.

The second half was a battle of inches with both sides having their chances and both keepers on fire, until Metro again broke through with Tomislav Grgic netting to once again have Metro ahead, but again they could not hold onto it as Osman Kose continued his scoring form to level the game at three, and had a chance to snatch the tie in the final five seconds as Hashim Al Husainawy teed up Kose who skied an open goal to send the game to extra time.

The miss would come back to haunt Hume as Ilhan Altuntas struck the golden goal on a counter attack to send Metropolitan into the last eight of the competition.

Next up saw Vermont of State League One who eliminated Western Wolves in the opening round of the competition take on Series Futsal Victoria powerhouse Pascoe Vale. The cup has thrown up its share of surprises so far and this looked like it could be another as Reuben Langerak struck to give Vermont the lead as they dared to dream. Pascoe would ensure they wouldn’t go down without a fight and drew level through the in form Kevin Dos Santos to go into the break on level terms.

Vermont were defending for their lives and not giving the Lions an inch, before again extending their lead through an Alex Husseni strike as the dream result was back in the picture. Pascoe kept their cool and were not fazed by the scoreline as Behrad Behzadpour pulled his side level, before Jason Barrientos tapped home to give the Lions the lead for the first time. Some quick thinking from Alison Lima Da Rossa moments from time saw hime float a free kick into the empty net as the Lions proved too strong as they found their way through to the next round.

Next up saw Series Futsal Victoria side Carlton Heart face State League One side Footscray who were coming off a big win agains the defending Champions Fitzroy. Carlton knew they could not take their opposition lightly and were on top of their game in the opening half as a brace from Arturo Garzon and a single from Harry Robotis helped the Heart out to a comfortable advantage.

The second half was cruise control for the Heart as they struck a further two goals through Stephen Gustus and Dylan Govic to run out comfortable winners and bring Footscray back down to earth as they secure a safe passage into the Quarter Finals as they will hope to push on and secure the silverware for the first time.

The final game of the night saw State League One side Collingwood take on Ashburton who were pushing for a place in Series Futsal Victoria and in red hot form. Ashburton were ruthless from the outset as they raced to a 5-0 half time lead thanks to brace from Sam Mander and singles to Patrick Strasser, Alex Mebrahtu & Alistair Dunlop had the game all but over a the break.

Ashburton continued running riot on the second half, and despite a Dima Nichiforenco strike that got Collingwood on the board, it was just a blip on the radar as Mebrahtru fired home twice more to complete a hat trick, while Dunlop and Strasser also completed bracer to see Ashburton through to the Quarter Finals.