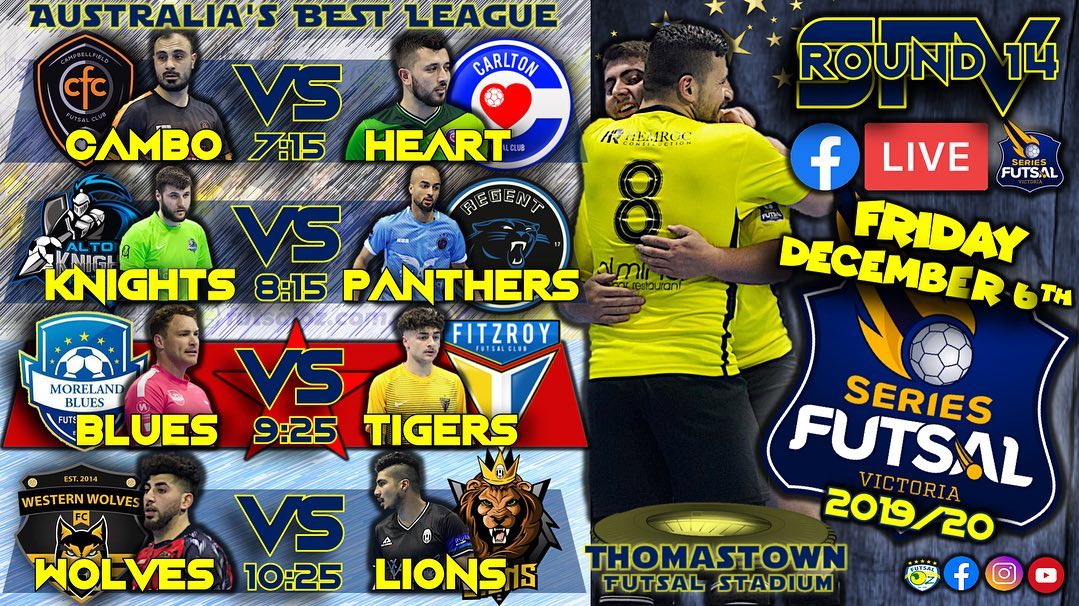 Our night kicked off with 5th placed Campbellfield taking on 6th placed Carlton Heart in a game that could see Cambo double the difference in points from them and the relegation zone as they sat six points above Carlton.

Our match kicked off with a bang as Carlton’s Mazen Abdallah pulled off some crucial early saves to keep his side in the game. These saves eventually lead to the opener from Josh Pulvirenti as he fired through the goalkeeper’s legs. A brace from Arturo Garzon Diaz was then on the horizon as he struck from very close range for both. Abdirizak Ahmed then made it 4-0 which came after he excited the crowd with excellent dribbling which allowed Carlton to finish the half strongly without conceding.

The second half kicked off with Campbellfield striking early through a magnificently placed Thomas Brossard free kick from distance. It really took a touch of brilliance to get past the inform Abdallah. The resurgence only lasted a few minutes though as a powerful strike from the left flank saw Thomas Natoli get his first of the night and stretch the deficit back to four as they sat 5-1 up. A tackle from Dylan Govic and pass to Chaaban Rajab saw the scoreline reach 6-1 and it was Henrique Pimenta who snatched a goal from close range to chase the game. The celebration that followed wouldn’t age well though, as he gloated in Abdallah’s face, which only gave him more confidence. The Carlton keeper could then be seen making numerous crucial saves towards the end of the game to claim the man of the match title and keep the scoreline at 6-2.

Our second of the night was an unpredictable clash between a (although last-placed), relatively inform Regent take on an Altona side fresh of being dominated by Cambo 15-3 last round.

The first half kicked off with Osman Ahmed firing from close range to open the scoring but was met with a Zois Galanopoulos assisted equaliser through Sime Brzoja. Altona then took the lead with a well-placed finished from Andelo Svalina after tackling Osman Ahmed in the Regent half. Brilliant skill and an intelligent finish saw Joaquin Jimenez equalise for Regent, and was also complimented by his teammates in their own goal-scoring endeavors as Shifa Ahmed, Fundi and Ismael Mohamed all fired to finish the half strongly at 5-2.

It was a tight affair in the second half, and the only thing that separated the sides was a single goal from Svalina to make his brace. The goal came close to half-way through the half, but it wasn’t enough to ignite a comeback as Regent kept pushing for a sixth goal, forcing Frano Saric to make heroic saves. A few quality saves from Mohamed Fadal were also necessary as the goals stopped flowing as the match finished at 6-3 to Regent.

Our third clash saw the two goliaths from last season face off in an unpredictable affair as Fitzroy and Moreland locked horns.

The first half kicked off with fireworks as a Muhamed Temel opener came early when he struck from close range. Going down early only fuelled Fitzroy though as they equalised through Scott Rogan from his ranged strike. It was a brace in quick succession from Fitzroy’s main-man as Rogan then struck a penalty after Moreland exceeded their limit of five fouls per half. Leo Kimpara would then strike to increase the lead to 3-1 after a magnificent run from Adam El Hayek that saw him square Kimpara in the centre. El Hayek would then strike a penalty passed Felipe Bley as his side continued to shock the league leaders at 4-1.

An own goal from Rogan would give a star-studded Moreland hope for the second half, but the goal was countered by a flawless Fitzroy performance as they struck another three goals. Rogan would complete his hattrick by firing a left footed first timed volley into the back of the net, and Josh Allen would add to his team’s well-rounded performance by getting two well-taken goals himself. The game finish at 7-2 to Fitzroy and was a shock to everyone considering Moreland’s recent form and new signings.

Our last clash saw Pascoe Vale seek revenge against an out-of-form Wolves’ side that defeated the equal league leaders in the previous fixture early in the season.

Our first half kicked off and it looked like Pascoe Vale were bringing the heat once again as they were strong from the get-go. An early Hayden Kanjo own goal meant that Wolves’ began trailing early, and it was only downhill from there. A fantastic volley from the right flank from Joao Da Silva saw Pascoe double the lead and only grow more powerful. It was a Jason Barrientos tap-in from the backpost that closed the half at 3-0, and with Moreland losing in the match previous, Pascoe were looking like favourites to be clear league leaders.

Our second half told a narrative similar to the first, as Wolves’ did attempt to make a resurgent comeback but they couldn’t stop a superior Pascoe Vale side from adding to their goal tally. Kevin Dos Santos added another for his season as he struck powerfully from range. Hanna Shamon got the first for Wolves’ from close range, but was countered by a Joao Da Silva penalty. Lokman Ramadan and Hayden Kanjo both scored to close the deficit but goals from Behrad Behzadpour and Andre Caro meant this one was finishing 3-7 to Pascoe Vale who were now solo league leaders once again.