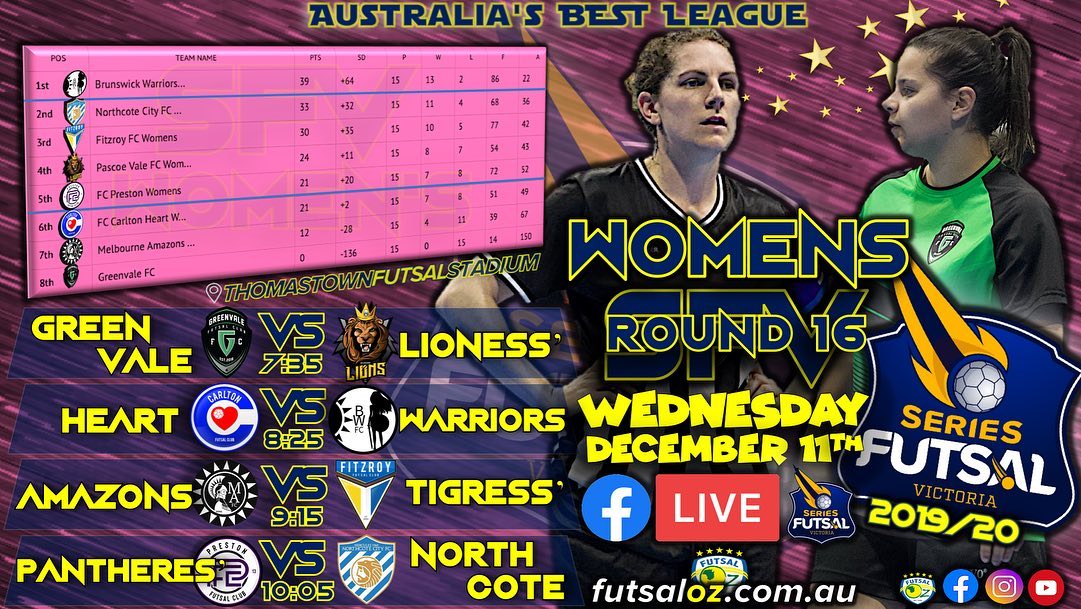 The opening game of the round saw Greenvale who sat on the bottom of the table, take on Pascoe Vale who were aiming for a top four finish. The first half followed the script as Pascoe struck eight goals to one with Bruna Silva leading the way with four first half goals to give her side the advantage at the break.

The second half on saw Pascoe add tot heir goal tally as they fired home a further eight times, as Abbey Flight finished with a game high five goals, while Marcela Marques and Anita Caro chimed in with two of their own to give the Lioness’ a massive win and confidence boost.

Next up saw Carlton Heart face league leading Brunswick Warriors. An important game for both teams, it was the Heart who struck first through Cleo Taliadoros to take the lead which they defended valiantly to go into the break with the lead and hopes of a win.

Within just seven minutes of the second half the Warriors showed why they are the Champions elect as they struck six times thanks to braces from Pam Demetriou, Lisa Fonua & Monica Fonua which all but broke the Hearts back. A stunning late goal from a tight angle from Rebecca Davies would only prove a consolation as the Warriors took another step towards the title.

Next up saw Melbourne Amazons take on Fitzroy as both sides were looking for a win in this one. The game started on level terms, before Fitzroy broke the deadlock as a nice move saw Ebru Efe tap home to give her side the lead. Efe would pounce on another chance soon after as she doubled her sides advantage as they went into the break with a two goal cushion.

Early in the second half the Amazons showed signs of life as Alex Sinclair kept her side in the game after catching Fitzroy napping to halve the deficit. Fitzroy responded quickly to restore their two goal lead through Ebru Efe who completed her hat trick, and soon after Stef Oddo finished to all but kill off the game. Another from Oddo put some polish on the result for Fitzroy and despite a late consolation from Biana Lee, it wouldn’t be enough as the Tigeress’ held on for an important win.

The final game of the night was a derby to end the card as Preston took on Northcote in the hopes of claiming a top four placing. It was Preston who opened the scoring through Sidney Allen as she gave her side the lead, before Eleni Fakos struck to square the ledger. Preston looked up for the fight as they again took the lead through Elizabeth Eyar to go into the break with the lead.

Having never bested their opponents, Preston looked determined to make that stat a distant memory and it looked as though it would come about as Steph Galea fired home to give her side a two goal cushion, and when Taylor Halabi struck late in the piece it looked as if the points were Prestons. Try as they might Northcote could not find a way past the brilliant Rana Atme in the Preston goal, as the Pantheress’ held on for a massive win.