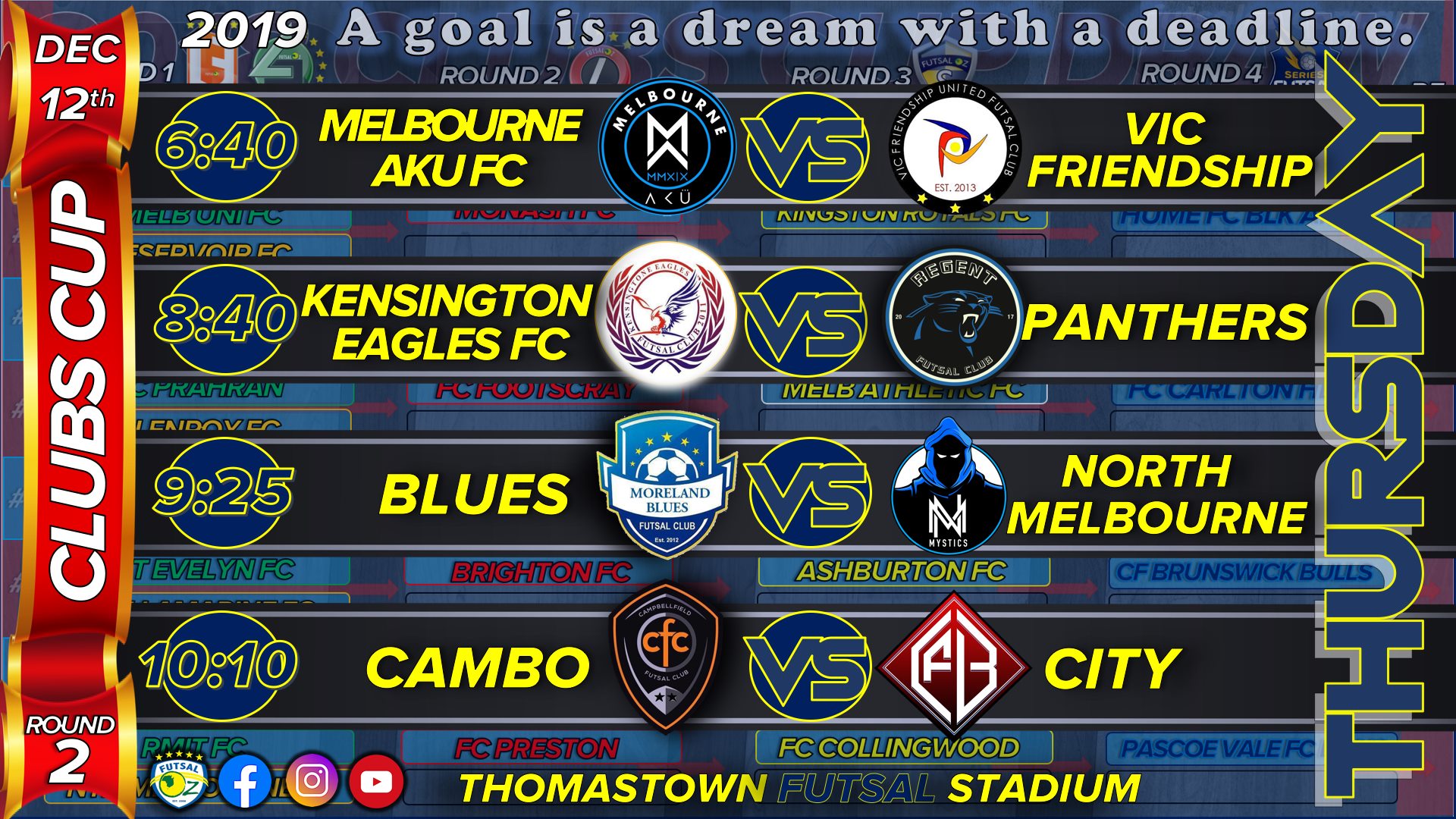 The opening game of the night saw State League Three side Melbourne AKU take on Vic Friendship of the State League Championship with a spot in the Quarter Finals on the line. A fast paced start to the opening half saw the pair trade blows as a first half hat trick from Melbourne’s Ruz Roslan, supported by a single to Maxi Avram gave them a slender lead at the break, as a brace from Kevin Lam & a single to Aaron Phung kept Friendship in the game.

AKU turned the screws in the second half asa they piled on a further five goals, as Roslan added his fourth, and Kui Mu netted a second half brace to see AKU knock out their higher ranked opponents and find themselves in the last eight of the cup.

Next up saw State League One side Kensington Eagles take on Series Futsal Victoria outfit Regent City. A close start to the contest saw Regent City strike two first half goals thanks to Shuayb Abdulkadir & Abdulkadir Mohamed to take their side into the break with a slender lead.

Regent were in control for the majority of the second half as they fired home twice more through Abdulkadir & Shifa Ahmed for a 4-0 advantage, and despite a quick fire brace from Ali Molaei, it wouldn’t be enough as a late goal from Ismael Mohamed sealed a safe passage into the quarter finals for Regent City.

Next up saw Moreland of Series Futsal Victoria take on State League One side North Melbourne. In what was a tough clash for the mystics, their higher ranked opponents were on top in the first half saw they piled on five unanswered first half goals, with Cosimo Russo struck a brace and Jose Filho, Rico Hauser & Atay Ibrahim all bagged singles to all but have the tie wrapped up.

The Blues didn’t let up in the second half as Russo struck six more second half goals to take his tally to eight for the game and seal a safe passage into the quarter finals for Moreland, while for North Melbourne, goals from Nick Nikolakoudis & Johnny Crocaris were consolations to take out of a disappointing evening.

The final game of the second round saw Campbellfield of Series Futsal Victoria face Brunswick of the State League Championship for the final place in the knockout stage. A commanding first half display saw Campbellfield build a big 5-0 half time lead thanks to a brace from Henrique Pimenta and singles to Fabio Albuquerque, Thomas Brossard & Redouane Sarah had their side in control.

Brunswick fought back in the second half as they netted twice through Paolo Dominguez & Andrea Zaccone, but it wouldn’t be enough to progress as Pimenta sealed his hat trick and Brenno Polatti struck late on to see Campbellfield book their place in the quarter finals.