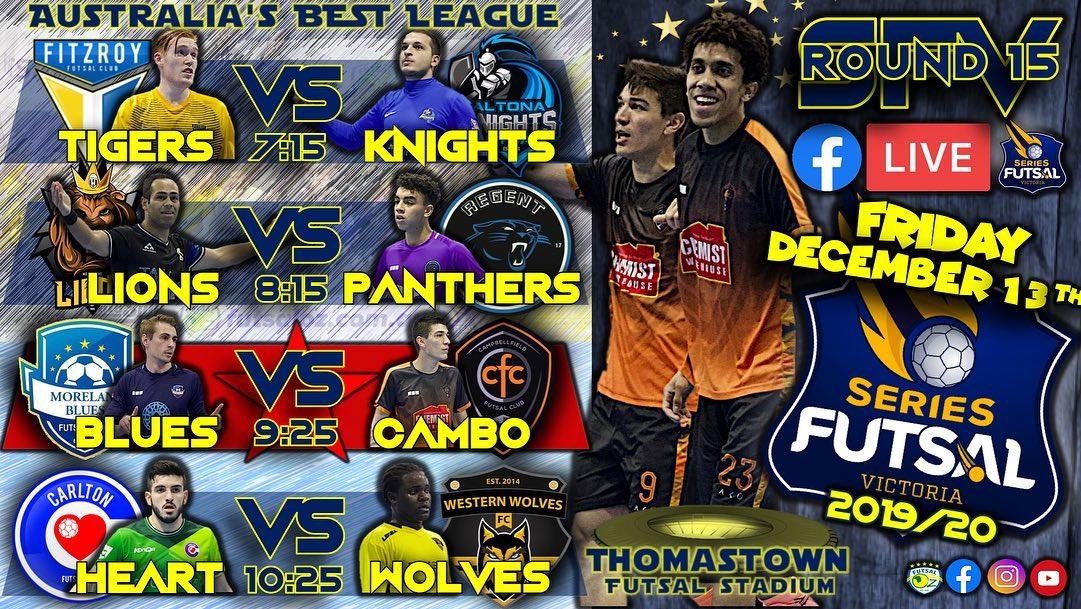 Our first match of the night saw an inform Fitzroy side take on Altona who were desperate for points as they sat at the bottom of the table.

The half kicked off and like a typical Fitzroy game, kicked off with the champions playing with high intensity. From the get-go Altona were caught off guard and flat-footed as Scott Rogan opened the scoring with a well-placed finish. Altona would find their feet after the goal having multiple attempts  to match Fitzroys. A goal would eventually come from Nicholas Jurcic after a blunder at the back that allowed Jurcic to fire a fantastically placed longshot. It didn’t take long for Fitzroy to retake the lead though with Elias Parthimos scoring, but Altona would quickly equalise once again through Konrad Dobraszkiewicz. The half looked over at 2-2 until Tyler Garner squeezed a finish in from the left corner to retake the lead with a goal that left the commentators questioning ‘how did that go in?’.

In a half that saw the debut of young Matt Sirgavani, Fitzroy stole the show as they doubled their goal tally for the game to six whilst conceding no more. The first goal came through Garner firing a low driven toepoke from outside the area which was complimented later by Josh Allen’s strike from a similar distance. Scott Rogan finished the game powerfully to make his brace, celebrating with the young Fitzroy junior players in the crowd.

Our next fixture saw league leaders Pascoe Vale attempt to maintain their distance from Moreland in second as they faced relegation-threatened Regent.

From the get-go this match looked to be an uphill battle for Regent as Joao Da Silva took the early lead from close range as the ball fumbled past the Regent keeper. The Lions maintained a hot streak of attempts at goal putting Regent under a large amount of pressure as they struggled to keep up with the speed and physicality of Pascoe Vale. Jake Besenyi would be the one to double the lead from a Kevin Dos Santos cross to the back post which allowed the first half to finish at 2-0.

The second half opened with Alejandro Gomez scoring a brace of goals, one from the left wing and one from the centre. Regent replied to the first though as they snatched a free kick goal through Abdulkadir Mohamed. The resurgence wouldn’t last long though as Besenyi would make his brace with a goal after beating the goalkeeper and finishing into an open net. The goals didn’t stop there for Pascoe Vale as Andre Caro and Da Silva both fired goals from extremely close range to stretch the lead. A penalty from Shifa Ahmed allowed Regent to celebrate but only temporarily as Gomez struck a low and well-placed finish from range to close the game at 8-2.

The match began with Campbellfield taking it to Moreland early as they attempted to catch the opposition off guard, but Adam Cooper would shut them down with an accurately placed finish from range into the bottom corner. Cambo would reply though as Henrique Pimenta switched it to Michael Nguyen to allow him to strike and see the ball fall out of Felipe Bley’s hands and roll over the line for an equaliser. Moreland replied straight away though as Atay Ibrahim took the ball from the kick-off, carried it down the court easily and scored to retake the lead. Cosimo Russo would score and it was a brace of #ridiculous volleys from Jose Filho that allowed Moreland to finish the half at 5-1.

The goals really began to flood in the second half as Moreland ran a goalscoring riot. A brace of good goals from Atay Ibrahim, a second half hattrick from Russo, a brace from Temel to make his hattrick and a single for Cooper meant that Moreland finished the match with 13 goals. Goals from Thomas Brossard, Daniel Chabaani, Brenno Polatti and Redouane Sarakh meant that Cambo managed to put 5 past a star-studded Moreland side but that was ultimately it as they match finished 13-5.

Red cards were shown to Henrique Pimenta and Khaled Ayache which allowed for a very entertaining and controversial match.

The last match of the night was an unpredictable one as Western Wolves were desperate to steal three points away from Carlton to remain in the top half of the table.

Although the first half was tight, Wolves’ dominated the majority of the possession and attacking chances as they tested the Carlton defence and goalkeeper Mazen Abdallah. This may have been the case but it was the recently returned Chaaban Rajab who fired the opener emphatically to take the early lead. Wolves’ would equalise soon after though through Lokman Ramadan, and a lacklustre defensive effort from Rajab saw Nikola Velkovski find himself with the ball in the penalty area which allowed him to score from close range to take the lead. Saimone O-Raha at the backpost would make it 3-1 but a Harry Robotis reply in the same fashion would allow this half to finish closely at 3-2 to Wolves.

Our last half of Series Futsal for the night was surprisingly goalless considering the two sides but was certainly entertaining. It was a match of air-tight defences, quality goalkeeping and plenty of passion and emotion which made for a fantastic finale to the matchday. A man of the match performance from Billy Atik allowed Western Wolves to finish the game off at 3-2.