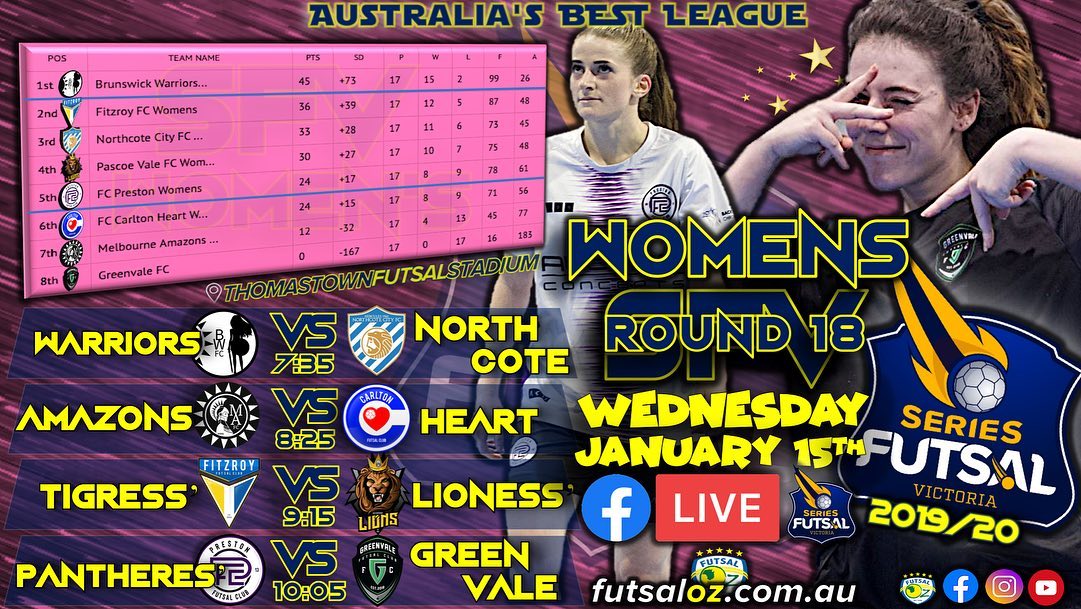 The opening game of the new year saw Brunswick Warriors take on Northcote City, as the Warriors looked to take another step towards the title. The Warriors edged the first half thanks to goals from Lisa Fonua, Penny Bakopoulos & Monica Fonua gave them the advantage, while a Mary Hubeek strike kept City in the game at the break.

Northcote battled hard in the second half but would fall just short as a second half brace from Lisa Fonua saw her complete her hat trick, while a second from Penny Bakopoulos helped Brunswick move to within one win of sealing the title.

Next up saw Melbourne Amazons face Carlton Heart in what was an interesting contest. A tight first half saw just the one goal with the Heart taking the lead through a Cleo Taliadoros strike to give her side a slender lead at the break.

Amazons would get on the scoresheet in the second half through Bianca Lee to put pressure on the Heart but Carlton proved too strong as Taliadoros struck for a second time, which was supported by goals from Morgan Kirk-Eaton and Steph to seal an important win for the Heart.

Next up saw El Classico take centre stage as Fitzroy took on Pascoe Vale. A tight first half saw both sides have plenty of chances to score but only an Ebru Efe strike would seperate the sides at the break to give Fitzroy a slender lead at the half.

The second half followed suit as both sides had their chances but both keepers were on top of their game until a second goal to Efe gave the Tigeress some breathing space and they would hold on for a hard fought win.