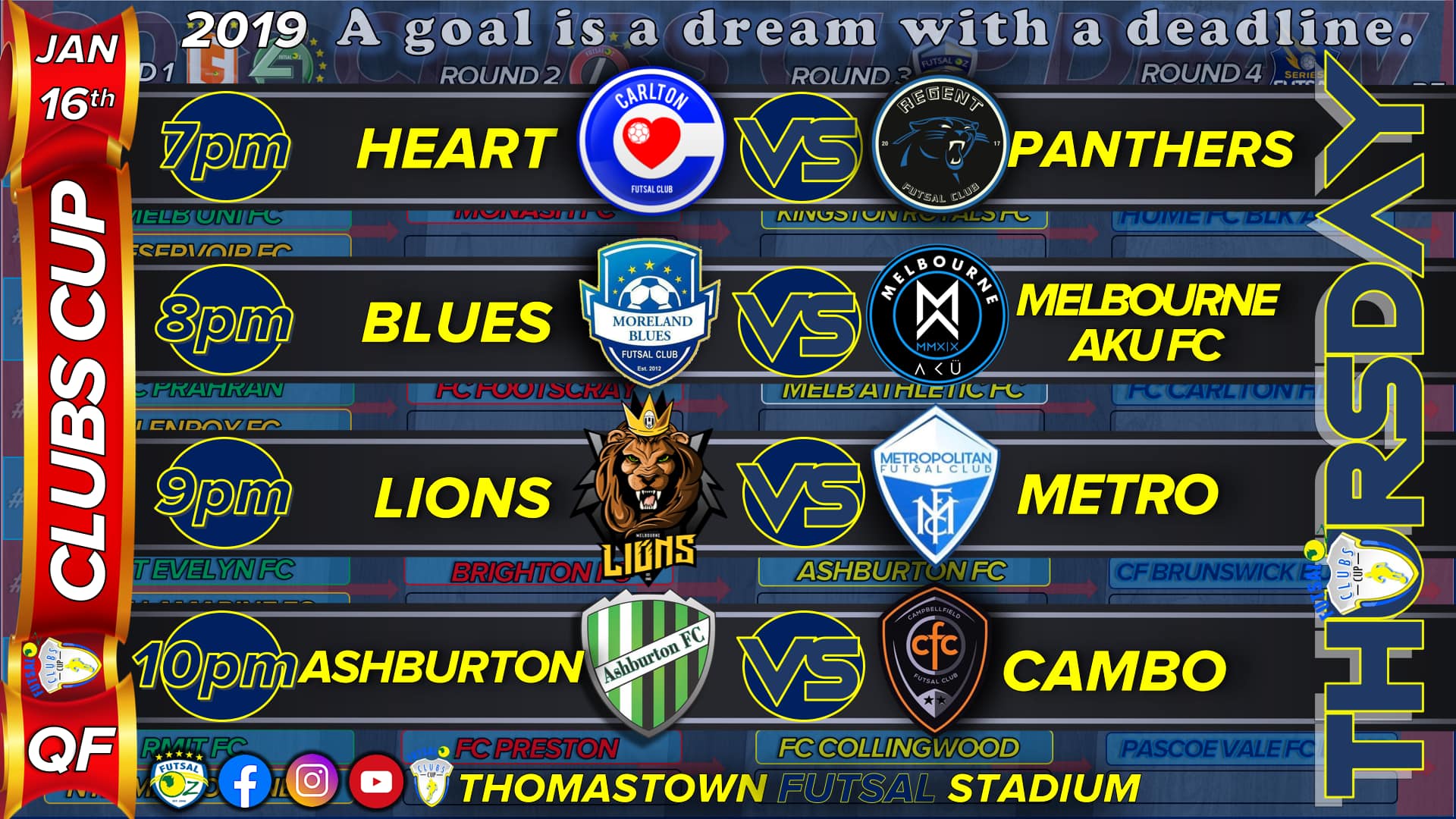 The opening clash of the Quarter Final stage saw Carlton Heart take on Regent City in an all Series Futsal Victoria affair. It was the Heart who opened the scoring thanks to some lovely footwork from Arturo Garzon in the build up to his finish for the lead. An own goal from Mohamed Abdi doubled the Hearts advantage, before Regent pulled a goal back through Abdulkadir Mohamed to halve the deficit. A fantastic goal from Arturo Garzon before the half would restore his sides two goal cushion, but Mohamed would strike for a second time before the break to pull Regent back within a goal at the break.

The second half saw Regent continue to battle and look to claw their way back into the contest but it wouldn’t be enough and despite a goal to Joaquin Jiminez, it wouldn’t be enough with Garzon completing his hat trick for the Heart, before a late goal to former Regent prospect Abdulbaari Hussein rounded out an important win for the Heart which saw them qualify for the Semi Finals.

Next up saw Series Futsal Victoria ladder leaders Moreland take on newly crowned State League Three Champions Melbourne AKU. In what was expected to be a one sided affair for the Blues, they started well thanks to a goal from Rico Hauser from range, before some magic from former Blue Kui Mu saw him bring his side level. Moreland piled on the pressure as they controlled the play and went into the half time break with a 4-1 lead after a Jose Filho brace and a single to Muhammed Temel had them in control.

Melbourne AKU would give their all in the second half but in the end ran out of legs as Moreland outclassed their lower ranked opponents with both Filho and Hauser finishing the game with hat tricks to round out a commanding win and a place against Carlton in the semi final.

Next up saw an old time rivalry renewed as Pascoe Vale of Series Futsal Victoria took on relegation threatened Metropolitan of the State League Championship. With years of experience behind them, Metropolitan were not about to roll over and give their higher ranked opponents an east win as they shocked the Lions early on, getting out to a 2-0 lead thanks to goals from Dino Redzepovic and Tomislav Grgic taking them into the half time break in front.

Metro had their chances to ice the game but saw them go begging, while defending valiantly to keep the Lions out. The shutout was broken when Alejandro Manuel Gomez beat his man and slid the ball home to halve the deficit, before Jake Besenyi was afforded too much time and space in close as he pulled his side level, and it seemed to have broken Metropolitan’s back as Manuel-Gomez again beat his player before finding Jake Besenyi at the back post to tap home the winner, and with Metro committing for an equaliser, a turnover saw Kevin Dos Santos stroll into an empty net to see Pascoe Vale take a hard fought win and book their place in the semi final.

The final game of the Quarter finals saw a red hot Ashburton of the State League Championship take on Series Futsal Victoria side Campbellfield. In a tight first half it was Campbellfield who edged the scoring with Ubeyde Cicek, Nam Pham & Henrique Pimenta all netting, while goals from Seamus Carr & Shelton Frimpong kept Ashburton in the game at the break.

Ashburton were pushing their higher ranked opponents all the way as they got out to a 6-4 lead thanks to braces from Alistair Dunlop & George Mcheileh to have an upset well on the cards. With the game in the balance, Chabaani would pull another goal back to keep Campbellfield in the game, before a late goal to Henrique Pimenta saw the game end level and head to golden goal.

It would again be Pimenta who sealed the win as he completed his hat trick to seal Campbellfield a safe passage into the Semi Finals.