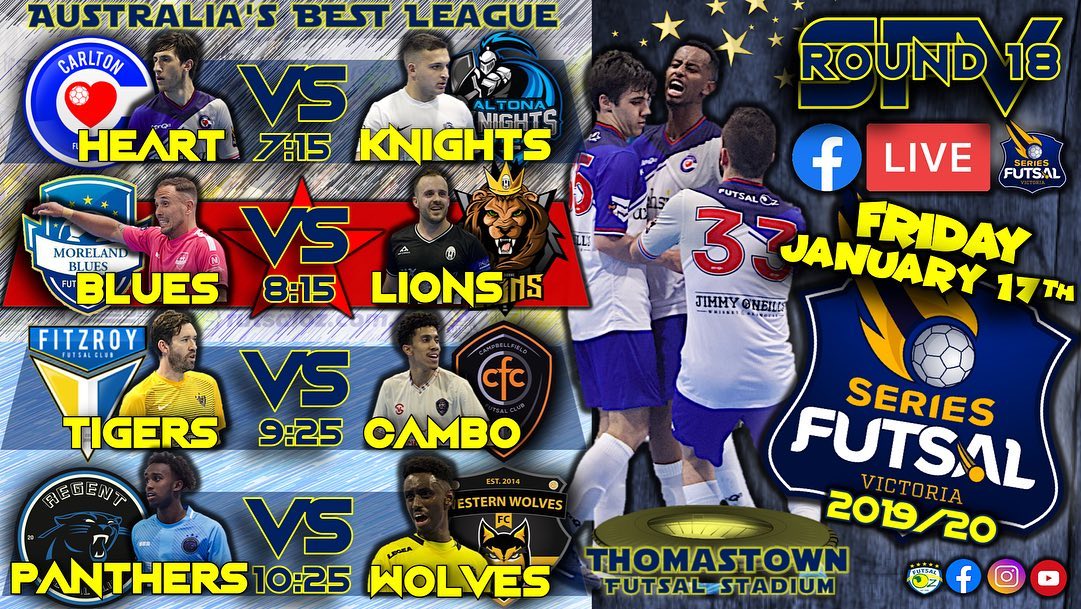 Our jam-packed night of Series Futsal kicked off with a battle between cellar dwellers as Carlton fought to remain in the fight to escape the relegation zone against an Altona side that are beginning to look destined to finish in the bottom three.

Our first half kicked off with Altona proving to be the stronger of the two with a performance that although was slightly unconvincing, still managed to give them a 2-0 lead. The half closed with Altona leading due to the heroics of Frano Saric, a close range finish from Camilo Marin and an own goal from Connor Irwin. Carlton were desperate for some precise finishing if they wanted to beat Saric and get back in this game in the second half.

It was a second half of crucial proportions for Carlton Heart as they managed to close the deficit with an own goal from Durim Cura after Michael Lettini stretched the two goal lead to three at the opening of the half. It was 3-1 and Carlton were fighting hard, and it was an inspiring Arturo Garzon Diaz performance that kept them alive. Shot after shot Saric was saving but Diaz finally would find his goal to close the gap and make it 3-2. It was a Moe Matar strike that rebounded to Diaz to allow him to collect his brace and equalise to take the match into penalties.

It was a tight penalty shootout but it was Moe Matar the ‘midget Messi’ that stole the game from the once leading Altona, scoring the winning penalty collecting a much needed three points.

Our next fixture was in complete contrast of the previous as the two titans of the league went head to head to attempt to finally gain an upper-hand over each other. It was a star-studded Moreland side that took on a well-oiled Pascoe Vale hungry to get revenge over their counterparts who sat in equal 1st place with them.

Our first half was as competitive as we expected with both sides failing to break eachother down offensively, allowing the half to finish at 0-0. We saw high levels of aggression, fouls and bad-mouthing which only added to the drama. Exceptional performances from Adam Cooper, Rico Hauser, Aaron Yu & Andre Caro proved that the second half would a #ridiculous affair.

Although the first half lacked any goals, the second made up for it as the crowd were treated to 8 goals in the final 23 minutes. We kicked off with Joao Da Silva finishing a low-driven strike to finally break the deadlock, but it was a powerful Adam Cooper shot from outside the area that matched the goal to equalise. From then on it was all Pascoe despite Moreland having a number of crucial chances, as Gerardo Soto struck to take the lead with a toepoke. It was Caro who struck next to make it 3-1 forcing Moreland to utilise the fifth man tactic, which only saw them score once through Lucas Vaz, and concede three times due to a goal each from Alison De Lima, Caro and Silva. It was a phenomenal affair that truly tested the two sides but Pascoe were the team to finish their chances which allows them to now sit on top of the league by three points.

Our third match saw an inform Fitzroy side look to redeem their previous loss to Campbellfield earlier in the season in an unpredictable clash.

The first half was a tight affair with nothing to split between the two sides who attacked hard but defended harder. A flurry of chances meant the match kicked off with high-pace and it Daniel Chaabani struck an off balance shot into the back of the net to take the early lead. Fitzroy began fighting harder and the pressure paid off as Jimmy Soufis split the defence with a pass to Scott Rogan, who squared Sinan Gluhak at the back post to tap in the equaliser and close the half at 1-1.

After a well-fought first half from both sides, it was time for both teams to kick into a higher gear and find their goalscoring abilities. It was Fitzroy who began to find the back of the net as Josh Allen fired a well-placed finish powerfully past the opposition keeper to take the lead. It was only a matter of time until Allen would claim another goal as he struck another hard shot to make it 3-1. It was then a Rogan screamer that smashed into the back of the net to make it 4-1, and despite Henrique Pimenta’s fabulous free kick, Rogan’s second goal would finish the game off at 5-3.

Our last fixture saw bottom-placed Regent Panthers lock horns with a Western Wolves side still fighting for a chance at the SFV title.

We were finally treated with a first half of more then two goals as the two sides locked horns and showed great attacking flair and skill. The half kicked off with Wolves’ scoring through a powerful Melvis Hecket strike, and it was Abdulkadir Mohamed who equalised composedly. Hanna Shamon would strike from outside the area to take the lead back and score a header to make his break and stretch the lead further. Fundi fired from range to close the gap but it was Lokman Ramadan who took his side into the second half with a 4-2 lead.

It was a ridiculous way to close the night with both sides putting on a show for the packed crowd. Joaquin Jimenez found himself in the middle of the drama as he scored an own goal and received a red card, but his side didn’t lie down as Fundi completed his brace, whilst Abdulkadir Mohamed scored two in the second half to complete his hattrick and a man of the match performance. The crowd was loud and the drama ensued as an inspiring Regent comeback lead to a last second penalty, which struck the post allowing Wolves’ to breathe a sigh of relief as the match went to penalties.

Although the Wolves were relieved from the penalty miss, Regent were the victors as Mubarak Ahmed struck past the intimidating Billy Atik for the winner.