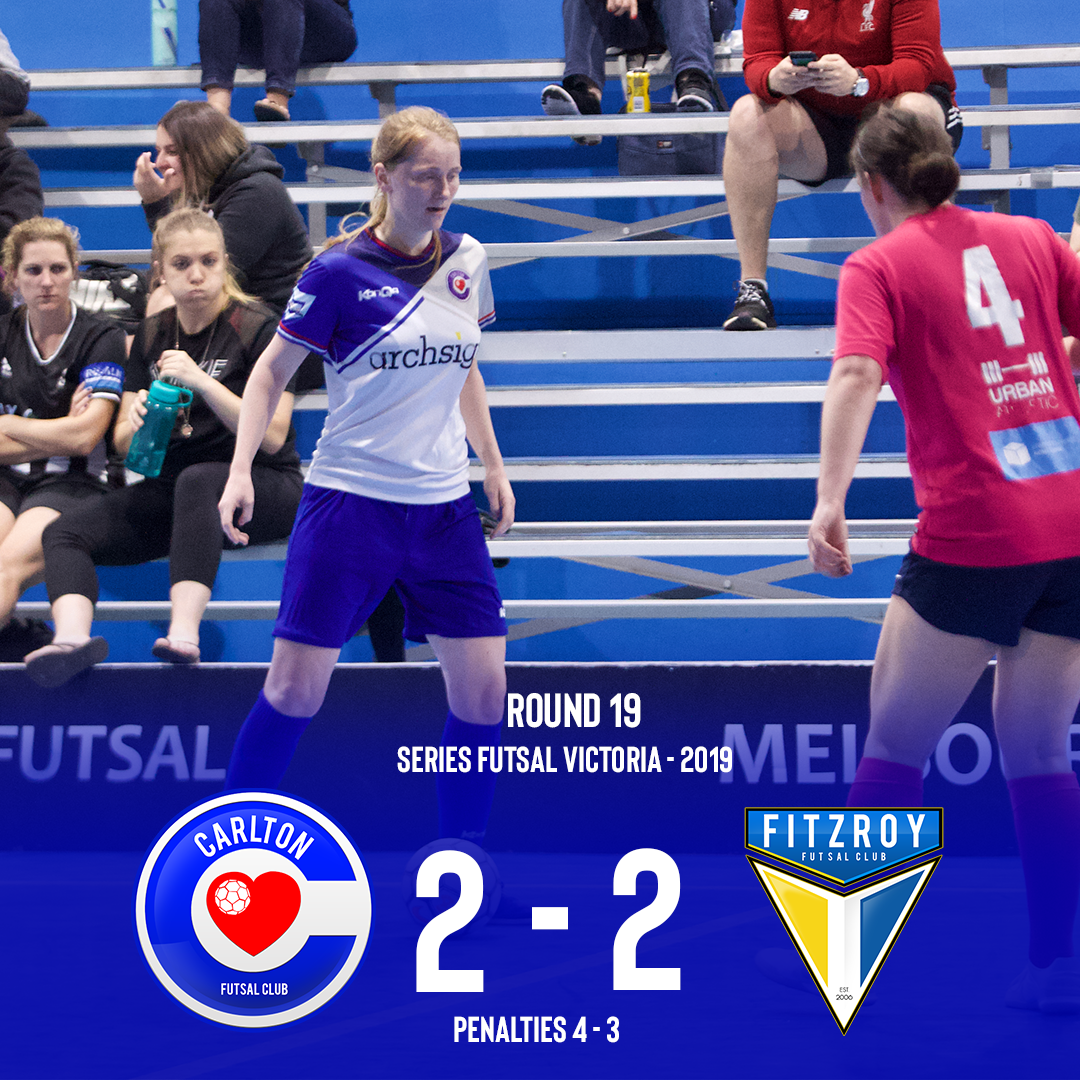 The opening game of the round saw Carlton Heart looking to keep their top four hopes alive as they faced second placed and in form Fitzroy. A tight start to the contest saw both sides have their chances until Carlton struck first on the break with Alysson Pym finishing to give her side the lead. On the stroke of half time the Heart doubled their lead with a fantastic counter attack finished off by Morgan Kirk-Eaton to give her side a two goal cushion at the break.

Fitzroy ramped up the pressure in the second half as they were peppering the Heart goal for the vast majority of the half, but could not find a way past Paige Daly who was at the top of her game. The Heart resistance was broken when Em Coppock struck to halve the deficit, and shortly after Fitzroy were level as a good bit of play saw Coppock tap home at the back post to level the game at two and send it to a shootout.

The first seven penalties were converted before Elaina Vatcky missed her spot kick to hand Carlton the win in a fantastic game of Futsal.

Next up saw Greenvale take on Brunswick Warriors who were already crowned Champions. A dominant first half from the Warriors saw them pile on nine goals to no reply with Monica Fonua and Daniella Galluccio bagging hat tricks, supported by singles to Pam Demetriou, Penny Bakopoulos & Lisa Fonua all find the net for a 9-0 lead at the break.

The second half saw Greenvale stem the flow of goals and net twice of their own through Kristie Farmer but it wouldn’t be enough as both Monica and Galluccio took their tallies to four for the game to see the Warriors continue to round out their season in style.

Next up saw Melbourne Amazons take on Preston as both were looking to gend their season on a high. It was Preston who struck first through Armina Sherifi to give their side a deserved lead, though Amazons hit back twice through Rachel Grove & Helena Chetcuti to take the Amazons into he break with the lead.

Preston battled back into the game and drew level through Steph Galea to tie the game at two, before a thunderbolt from Elizabeth Eyar found its way in off the crossbar to give Preston the lead back. With the game in the balance it was Sherifi who struck for a second time to seal all three points in a hard fought game for Preston.

The final game of the night saw third placed Northcote looking to hold onto hopes of a second placed finish as they took on fourth placed Pascoe Vale. A tight first half saw Bruna Silva give the Lioness’ the lead, before Alana Cerne netted to bring City level at the half time break.

The sides traded blows in the second half but Northcote had an answer for everything the Lioness’ threw at them as goals from Evangelia Parthimos & Julie Tran were not enough for Pascoe to take a result with goals from Eleni Fakos, Camila Fresneda & a match winner from Laila Abdullatif giving Northcote the win.