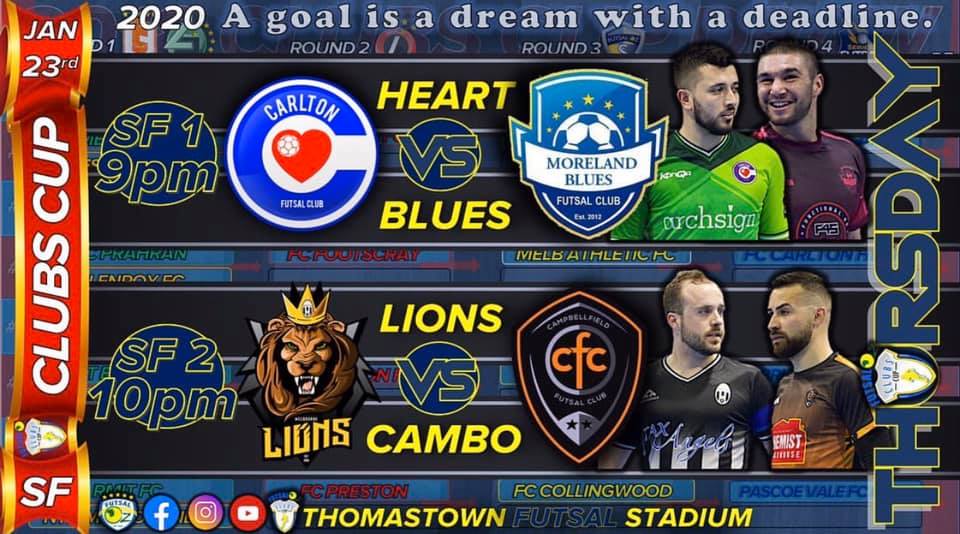 The first of the Semi Finals pitted a star studded Moreland against a Carlton side who have endured a rollercoaster season in the league. The Blues were on top early and got their rewards as Rico Hauser struck to give his side an early lead, before Cosimo Russo doubled his sides advantage. Carlton pulled a goal back before the break through a good finish from Abdirzak Ahmed to halve the deficit and take the Heart into the break trailing by a goal.

Early in the second half Carlton pulled themselves level as a quick throw in was finished off by Ahmed again for his second of the game. Moreland again regained the lead as Hauser won the ball and found Russo who struck for a second time to restore his sides advantage. Chaaban Rajab pulled the Heart level as his deflected effort found the net, before Rajab turned on the style finishing a stunning bit of play with an even better finish off the crossbar to give his side the lead for the first time. Rajab then intercepted a pass and rolled Ibrahim and Timmins to open up a two goal cushion, and soon after the Heart found them selves three up when Ahmed laid off Rajab for his fourth goal in a row to leave the Blues shell shocked. Try as they might Moreland could not pull themselves back into the contest and were punished again when Moe Matar struck from a side ball, before the performance was rounded off by a good finish from Harry Robotis to see the Heart into a second Clubs Cup Final and send the Blues home in the Quarter Finals.

The second of the Semi Finals saw Series Futsal Victoria league leaders Pascoe Vale take on Campbellfield as a spot in the final awaited the winner. A tense first half saw Campbellfield have more of the chances, only to be denied time and time again by the brilliance of Pascoe Vale stopper Aaron Yu, which gave the Lions the chance to remain in the game and take the lead through Alisson Lima Da Rossa who struck late in the half for a slender lead at the break.

Early in the second half Cambo were rewarded for their goal pressure as Sofiane Soufi struck to level the scores at one, but again the Lions took the lead a well taken finish from Jake Besenyi had them ahead once again. Cambo were not going away though and pulled level for a second time when a long ball from Michael Nguyen was touched in by Fabio Albuquerque to level the game at two. Pascoe Vale continued to find answers and took the lead for a third time through a clinical finish from Joao Da Silva as the Lions looked destined for a spot in the final. Cambo turned to the fifth man which paid off when Danny Chaabani struck from a rebound to send the game into extra time tied at three.

Both had chances to win it and both sides were living on the edge sitting on five fouls but a late goal from Andre Caro via a deflection proved enough as the golden goal sent the Lions through to the final where they will face off against the Heart.