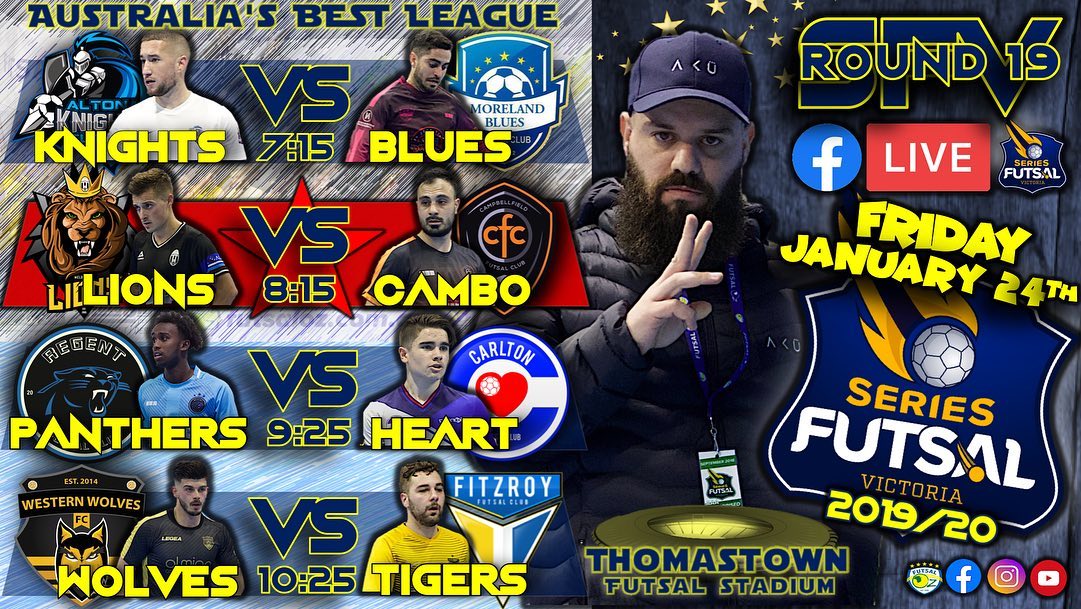 Our first clash saw last placed Altona face off against a Moreland side desperate to get back to winning ways after losing to rivals Pascoe Vale in the league and Carlton in the cup.

The match kicked off with Jose Filho showing fantastic composure to take the early lead beating the intimidating Frano Saric with a great show of skill. Atay Ibrahim scored soon after but it was Michael Lettini and Huon Russell who kept their side in the game with a goal each. Ibrahim would then fire precisely into the top right corner to take the lead back but it was another Lettini goal that wouldn’t allow Moreland to run away with the victory.

The second half was the one that got away for Altona as Moreland finally regained those killer instincts, capitalising on their opponents mistakes and punishing them relentlessly. It was a single goal each for Filho, Rico Hauser, Ibrahim, Cosimo Russo and Muhammed Temel that allowed Moreland to finish the match with a decisive 9-3 lead.

Our next fixture was a repeat of the incredible FOz Cup semi-final that saw Pascoe Vale beat Moreland in golden goal. The Lions will attempt to maintain their spot on top of the table whilst Cambo look to escape the relegation zone.

It was an incredibly tight contest between two sides that were refusing to lie down for the other. Well-oiled defensive structures meant that the first half lacked jaw-dropping saves from the goalkeepers, but Aaron Yu still was the talk of the town as he found himself limping off the court early. With what seems like a serious injury, Pascoe were undoubtedly a key-man down for the rest of the fixture, and potentially the season. Soon after the injury, Pascoe found themselves on the receiving end of an Ubeyde Cicek deflected strike that allowed Cambo to enter the second half with a 1 goal advantage at 1-0.

The second half began and it quickly became the Joao Da Silva show as he quite literally put the team on his back. He struck early to equalise and it didn’t take long for him to get his second as he took the lead emphatically. Another precise and powerful finish from range meant he got his hattrick, which was soon followed by an assist for Gerardo Soto who tapped in a shot from the back post. One more well-taken goal and a chip into an open net from his own half meant that Da Silva finished the match on 5 goals and 1 assist, beating Cambo whilst maintaining his sides spot in first place of Series Futsal Victoria.

The first half was quite competitive, with both sides finding the back of the net. The first came through an Ernie Simsek tap-in, which was replied to by none-other then Fundi for Regent who allowed the match to sit at 1-1. It remained equal until Chaaban Rajab had his say with a left footed shot to take the lead. Carlton continued to work hard as did Regent, but it was the Hearts who fired again through Abdirizak Ahmed who passed the ball into the back of the net from close-range against his old club. The half finished at 3-1, but Regent were definitely still in the game.

The second half was an almost identical affair as even though both sides were very much in it, it was Carlton who edged their opponents. It was an Ahmed free kick that struck under the cross bar and into the back of the net as it was followed by loud cheers from the audience. It was 4-1 but it wasn’t over as an Arturo Diaz own goal meant Regent were still alive. A great goal each for Simsek and Abdulkadir Mohamed added to the drama of the game but that was all as the match finished at 5-3 to Carlton.

It was our last clash of the night and Fitzroy’s chance to redeem themselves after the first time they met with Western Wolves earlier in the season. The Wolves were sitting just outside the top three and were three points behind Fitzroy, so this match was about more than just bragging rights.

This unpredictable clash kicked off with Wolves’ taking the early lead through a Peter Tamburrino error after Lokmen Ramadan struck a saveable effort at him. It didn’t take long for Fitzroy to make their way back into the game as Elias Parthimos struck hard off of Scott Rogan’s pass to equalise. It was an Adam El Hayek longshot and a Tyler Garner finish that allowed Fitzroy to take the lead and stretch it to 3-1. A Rogan tap-in from Jimmy Soufis’ pass allowed Fitzroy to finish the half strong with a 4-1 lead.

It was a second half of ridiculous circumstances with the Wolves kicking it up a gear or two to keep themselves in the game. They entered the second half 3 goals down but they weren’t going down without a fight as Ramadan scored again with a top cornered strike. Wolves’ would find two more goals to equalise through Melvin Becket and Hayden Kanjo who both fired through Tamburrino’s legs. It was an own goal that allowed Fitzroy to steal the lead back, but Becket wasn’t allowing his side to fall as he struck a goal utilising fantastically skill with a precise finish to equalise again. It was then another goal each for Ramadan and man of the match Becket as both players struck emphatically to the crowd’s utter enjoyment as they cheered the building down. A consolation goal for Tyler Garner allowed Fitzroy to have some hope, but the heroics of none other than Billy Atik gave Wolves’ their second win over Fitzroy this season.