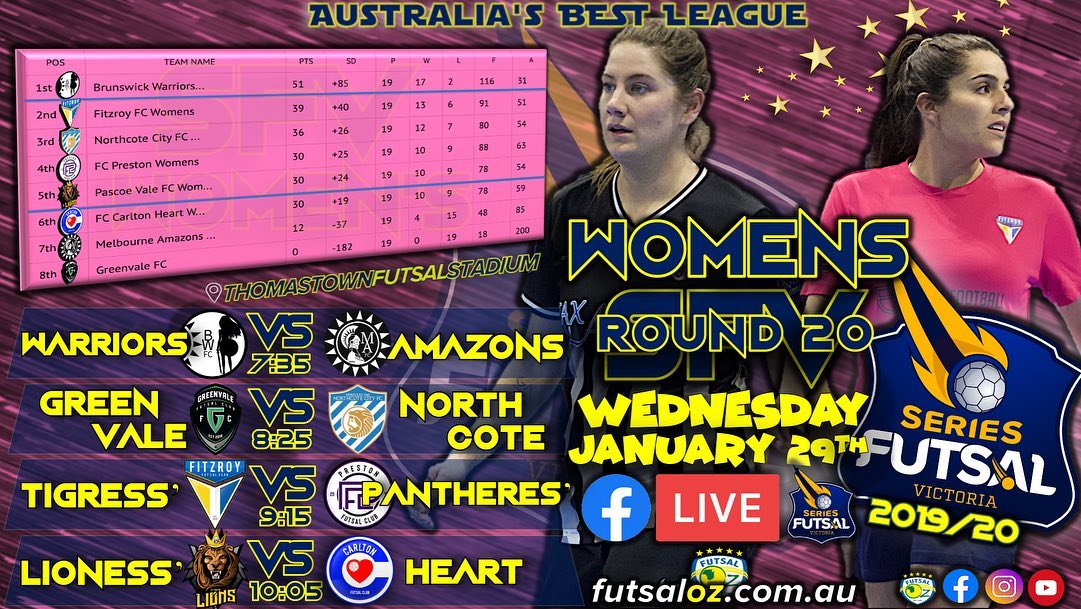 The opening game of the night saw already crowned Champions Brunswick Warriors take on Melbourne Amazons who had found some form of late. A tight first half saw the Amazons get out to a 2-0 lead thanks to goals from Rachel Grove and Maia Heysen to put the league leaders on the back foot. Brunswick steadied themselves to convert three unanswered goals to take a lead into the half time break as Monica Fonua bagged a brace and Daniella Galluccio a single to take the Warriors into the break with a slender lead.

The second half was one way traffic as the Warriors stepped it up a gear and proved too good, adding seven goals to one in the second half as Monica all but sealed the golden boot with four second half goals giving her a game high six goals to seal a big win for the Warriors to only further show why they have become the Champions.

Next up saw bottom placed Greenvale take on third placed Northcote. A commanding first half saw Northcote build a 4-0 half time lead on the back of a Melissa Garcia hat trick, supported by a single to Alyssa Kaddour to have City in a commanding position at the break.

Greenvale showed some Heart in the second half bag three goals through Kristine Farmer, Bec Catterwell & Zahara Abou-Eid but it wouldn’t be enough for a result as a second half brace from Eleni Fakos propelled Northcote to an important win.

Next up was the game of the night as Fitzroy took on Preston. Both sides were looking to secure ladder positions and after a cagey opening it was Fitzroy who struck first through Deanna Fruscalzo to give the Tigeress’ the lead. A penalty then went the way of Fitzroy which Em Coppock stepped up and converted to give Fitzroy a two goal lead at the break.

Fitzroy ramped up the intensity in the second half and added the next three goals through Em Coppock, Ili Jakab and Ebru Efe for a commanding 5-0 lead. A well worked set piece saw Preston get on the board through Steph Galea, but again Fitzroy had the answers as Coppock completed her hat trick, before a late consolation to Claudia Dimasi ended proceedings, but it was a convincing win in the end for the Tigeress’

The final game of the night saw Pascoe Vale take on Carlton with a place in the top four on the line. An early own goal gave Pascoe the lead as it deflected in off Katrina Tsalikidis for a slender lead at the break for the Lioness’

The second half opened with Liesl Woods doubling her sides advantage to have the Lioness’ in a good position, before a good set piece from Carlton was tapped home by Alyson Pym to halve the deficit and keep the Heart in the game. Pascoe would again extend their lead to two goals as Woods cut in and struck a fantastic goal to open up a 3-1 advantage. With time running out, Zoe Tizard would strike to pull her side back within a goal, and with one minute to play, the Heart were level with some nice play ending with Valentina Shamoon tapping home to send the game to a shootout.

Pascoe would convert all three spot kicks while Carlton’s first kick was saved by Madeline Nobbs and it proved a decisive save to seal all three points for the Lions and see them end Round 20 in the top four.