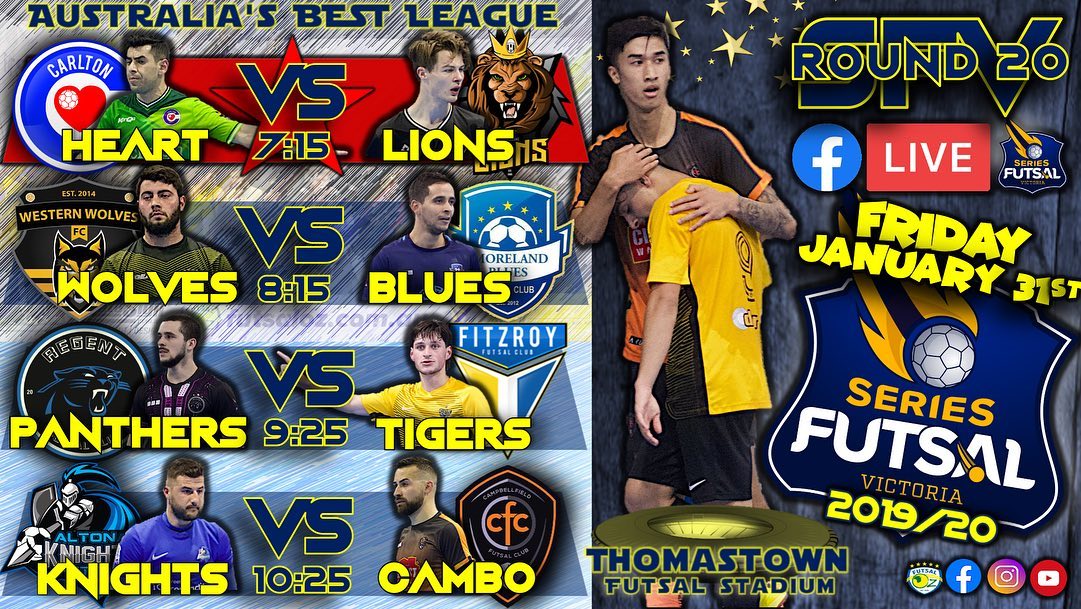 Our first match saw an inform Carlton Heart side try to escape the grasps of the relegation zone as they took the seemingly unstoppable league leaders Pascoe Vale.

Our first half was cagey and competitive with both sides struggling to break eachother down from the beginning. Decent saves from Mazen Abdallah meant that Pascoe needed a splash of brilliance to take the lead, and that’s exactly what it took as Andre Caro struck a perfectly placed power-shot into the bottom corner. It didn’t take long for an equaliser to come though as super-sub Joshua Pulvirenti took to the court and struck low and hard to make it 1-1. A fantastic Joao Da Silva strike took the lead back for Pascoe as they lead the game 2-1 at the end of the half.

The fans were treated to another close half as both sides competed through the 40+ degree heat for the three points. Although the scoreline saw Pascoe Vale separate from their opponents further with a goal through Alisson Lima, the game remained tight and intense until the final whistle. Fouls were committed and aggression persisted while Carlton pushed for a goal to put them back into the game. They eventually found their goal through a Thomas Natoli tap-in but it wasn’t enough as the clash finished at 3-2 to Pascoe Vale.

Our next clash was an unpredictable one as a Western Wolves side fresh out of beating Fitzroy in round 19 looked to upset another side in Moreland who desperately chase Pascoe Vale in the first position.

Our first half didn’t disappoint as the goals came quick and showed great quality. It was marksman Cosimo Russo who struck first as he fired a fantastically placed shot that curled into the top corner. Although Lokman Ramadan fired a well-placed strike to keep his side in the game, it was another Russo goal that kept the powerhouses in the lead. Wolves’ refused to lie down though with Nathan Long firing a #ridiculous longshot to equalise. Although Wolves were hungry, they couldn’t stop Lucas Vaz inside the area as he fired a tap-in to close the half with the lead.

The second half saw the drama heighten with both sides scoring more goals and committing more fouls to the pleasure of spectators. Wolves would find themselves hitting their five foul limit and conceding two penalties but were lucky that both shots were off target. Omar Chandabs side was lucky to have Striker Lokman Ramadan for this game as he wasn’t finished notching goals under his belt yet, firing two goals to make his hattrick. The goals showed great quality, but they weren’t enough as Russo also completed his hattrick with a fantastic toepoke, whilst Adam Cooper and Atay Ibrahim both collected goals of their own to allow the game to finish at 6-4 to Moreland.

Our next fixture saw cellar dwellers Regent fight to escape the range of the automatic relegation spot against a Fitzroy side looking to maintain their position in the top three.

It was another block buster match with unmissable content as both of these sides played a tug-of-war for the lead in the first half. It was Fitzroy who scored first though as Scott Rogan struck low and hard to take the lead for his side. Regent only grew hungrier after conceding and it was Matthew Trotter that brough his side back into the game emphatically. Fitzroy stole the lead straight back though through a wonderfully worked goal from Sinan Gluhak as he toe-poked the ball into the bottom left corner. Fitzroy weren’t finished for the half just yet though as Elias Parthimos struck a goal that resembled Gluhak’s almost perfectly, and although Regent fired through Fundi, Fitzroy maintained their lead, closing the half at 3-2.

Fitzroy’s attacking prowess and speed once they smell the blood of their opposition is well-known and was only exemplified further in the second half, as they snatched three more goals to dominate their opponents, temporarily at least. Goals from Adam El Hayek and Tyler Garner were only expected but it was Jimmy Soufis’ left foot shot to make his first goal of the season that left spectators confused but delighted. Fitzroy were looking to runaway with it, but it was a fantastic late hattrick from Abdulkadir Mohamed that saw him force fear into the tigers eyes, but it ultimately didn’t suffice as Fitzroy won 6-5.

It was a must-win game for Campbellfield facing off against Altona for an extremely valuable set of three points as they search to escape the relegation zone.

This match was hard to predict from the start with Altona proving to be a much stronger force then what they once were earlier in the season. This was justified by the respectable performance the Knights put on in the first half as they came back from a 2-0 deficit. Campbellfield’s two goals came from Daniel Chabaani and a kick out from goalkeeper Jarvis Jin. Altona came back emphatically as Luke Jurcic struck a brace and Durim Cura fired one of his own. Frano Saric snatched two assists to his name to set his side up to enter the second half with the lead.

Fabio Albuquerque scored early to equalise with a composed finish, but it was a quick brace from Mark Saric that cancelled out his goal to make it 5-3. The game remained extremely close though with both sides showing their attacking talents as both Michael Nguyen and Michael Lettini fired power strikes to make the game 6-4 to Altona. Another Cura, Lettini & Jurcic goal each allowed Altona to finish the game with 9 goals, and it was just one more goal from Nguyen that finished the game off at 9-5 to Altona.