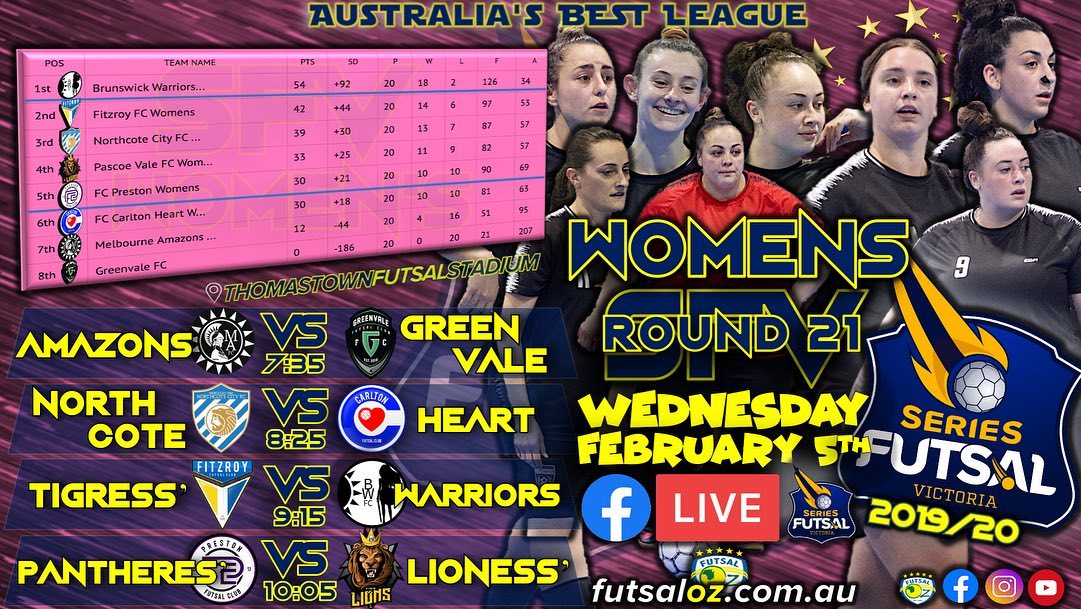 The opening game of the night saw a battle of the bottom take place with Melbourne Amazons facing Greenvale. Both sides were looking to end their tough seasons with a win, and it was a tight first half that saw Amazons edge the scoring with a hat trick from Alycia Eicke bagging a first half hat trick, supported by a single from Meg Grove gave them a one goal lead at the break, while a brace from Bec Catterwell & a single from Dahlia Badra kept Greenvale in the game.

Greenvale pushed the Amazons all the way in the second half, but a goal from Eicke would seal all three points with her fourth of the game to see the Amazons end their season with a win.

Next up saw third placed Northcote take on Carlton Heart as both sides were looking for positive ends to the season. A tense first half saw Northcote edge the scoring two goals to one, with Melissa Garcia & Alyssa Kaddour both netting for City, while Monique Kolyvas continued her good form to keep the Heart in the game.

Northcote came out of the break the stronger as a wonder goal from Eleni Fakos and a second from Garcia gave Northcote a commanding lead, and despite a late goal from Morgan Kirk-Eaton, it would only be a consolation with Northcote hanging on to end their season with a win.

Next up saw a top of the table clash to end the season as second placed Fitzroy took on champions Brunswick Warriors. It was the Warriors who had the better start grabbing the first two goals through Penny Bakopoulos & Monica Fonua, before Ebru Efe halved the deficit to keep the Tigeress’ in the game at the break.

The second half was one way traffic for the Warriors as they piled on six unanswered goals to take home their championship in style, with Monica Fonua sealing the golden boot with a hat trick, while Bakopoulos & Pam Demtriou ended with braces in a dominant win.

The final game of the season saw fifth placed Preston take on fourth placed Pascoe Vale. A tight first half saw Pascoe edge the scoring after an early brace from Sidney Allen, a brace from the Lioness’ Bruna Silva, supported by a thunderbolt to Liesl Woods and an own goal had Pascoe two up at the break.

Preston brought themselves back into he game on the back of a brace from Armina Sherifi and a single to Steph Galea, but it wouldn’t ‘t be enough for a win as Silva completed her hat trick and Woods a brace to see the Lioness’ wrap up fourth place and end their season on a high.