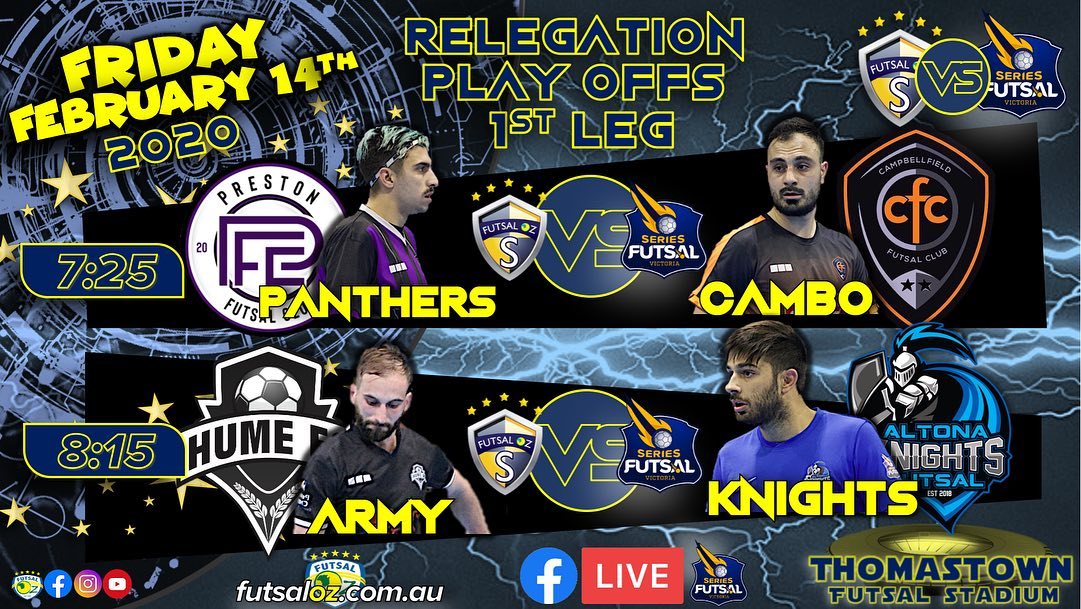 With new star-signing Billy Atik taking to the court for his debut, Campbellfield will look to lower the SFV dreams of Preston Panthers by defeating them in the first leg of the playoffs.

The game kicked off with both sides firing on all cylinders as it became 1-1 very early through strikes from James Ignatidis and Michael Nguyen. The lead was then taken by Preston through a Kojo Brown header but it was new signing Hayden Kanjo that made it all square once again. Cambo really found their attacking ability as Nguyen struck a fantastic finish into the top corner, and then saw his goal complimented by a Sofiane Soufi brace of very well taken free kicks. Preston wouldn’t lie down though as they also struck two more goals through Ignatidis allowing the half to close at 5-4 to Cambo.

Our second half kicked off and it was mostly Cambo’s game from then on as they struck early through a close range Brenno Polatti finish. Emilio Benjamin did score to keep hi side in the game though, but it was Soufi goal to make his hattrick to cancel it out. Danny Chaabani and Ubeyde Cicek both fired to stretch the lead and only continued to pile on the pressure searching for a 10th goal. They wouldn’t find it though, as the game was closed by a Kojo Brown chipped finish to end the it at 9-6 to Cambo. It was an entertaining fixture with plenty of goals and a red card for accumulation that forced Chaabani to exit the match, restricting him from playing the second leg.

Our next clash was a rematch from last season’s play-offs which would see Hume desperately seek revenge against an inform Altona side.

The first half was a very cagey affair with Altona showing that defensive discipline they’ve been exemplifying over the later rounds of the SFV season. It worked a charm for a large portion of the half as they also struck first blood through Michael Lettini after he tackled the opposition keeper, finishing into an open net. The defensive display may have been promising but the reliance on the talents of goalkeeper Frano Saric did expose them on one occasion as Hume fired the equaliser through Turan Sumbul. This close clash made for a very intriguing second half as we entered at 1-1.

The second half saw even tighter defences as both sides even struggled to get shots on target. It was an odd affair throughout the entire match as Altona and Hume clearly prioritized the minimal amount of goals conceded for the second leg. We were only treated to one goal in the second half as Lettini claimed his brace, firing the ball past a wall of players attempting to cover their goalkeeper whilst he was caught off of his line. The match finished 2-1 to Altona, allowing for a very interesting second leg.

Our next fixture was the first of the FOz Cup Men’s tournament, which pitted third placed Fitzroy against Championship winners and fan-favourites Ashburton.

The match kicked off tightly with both sides breaking each-other down early, scoring one a piece within the first two minutes. For Ashburton it was Liam Newman with the finish and for Fitzroy it was Elias Parthimos. It was a one-sided affair from then on though with Fitzroy managing to gain the lead and stretch it through a longshot from Jimmy Soufis, a backheel from Hamza Soueid and finishes from Parthimos and Tyler Garner. Garner was having a field day with his opponents lack of squad-depth as he ran rings around their players which only frustrated Ashburton further.

The goals kept on coming for Fitzroy as they fired plenty more goals to sink their opponents further. Sinan Gluhak fired a fantastic chip and another goal to make his brace, whilst Parthimos completed his hatrick and Garner got his second. Ashburton closed the gap slightly with a second goal from Newman and Alem Mebrahtu’s first but they were ultimately worthless as the match finish 9-3 to Fitzroy.

Our last match of the evening saw Carlton Heart look to maintain their resurgent form from later in the season as they faced a tough Wolves side fresh out of stealing the title away from Pascoe Vale and handing it to Moreland.

This didn’t appear to be a game of two hungry sides as from the beginning Carlton took advantage of a weak Wolves’ side. They began with a goal from Arturo Garzon Diaz as he struck from range, which was then complimented by a low-driven strike from Daniel Aliano. Harry Robotis struck next with a tap-in and it was an Abdirizak Ahmed easy brace that allowed Carlton to stretch the lead even further as the half finished 5-0.

It was another one-sided half as Carlton stretched the lead even further with more goals and more flair. It was a penalty from Diaz to make his brace, another for Robotis, and two firsts for Chaaban Rajab and Moe Matar that allowed Carlton to finish the game with 9 goals to their name. It wasn’t all doom and gloom for Western Wolves though as they managed to strike two goals, one through Ibrahim and Hanna Shamon.