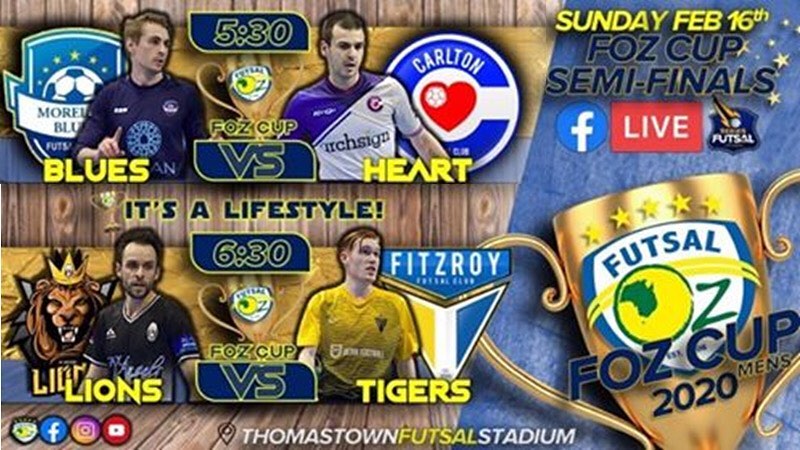 After dismantling Wolves’ in the quarter finals, Carlton Heart found themselves drawn with the league champions Moreland FC who looked to add to their trophy collection for the season with the FOz Cup.

Our first half was a fair close encounter, but there’s no question who edged the proceedings as Moreland ended the half with a 2-0 lead. It was a Cosimo Russo double as he walked the ball into an open net, but it was Atay Ibrahim’s half as he dominated with fantastic interceptions, ball control and passing maneuverers. It could have been a few goals more than what it was for Moreland but Mazen Abdallah stepped up to keep his side alive.

The second half began with Carlton firing to get back in the game, but their efforts just weren’t enough as they clearly missed the quality of Chaaban Rajab in the team. They were missing a finish touch which eventually caught up to them, as Abdallah found himself fumbling a ball into the back of the net to gift Russo his hattrick, which only slightly hindered a great performance by the Carlton keeper. Carlton would find a tap-in through Thomas Natoli and would then utilise the fifth man tactic but would only see it become detrimental to themselves as Rico Hauser and Russo took advantage of the open net with a goal each. This closed the game at 5-1 as Moreland made it to the final.

Our next FOz Cup clash saw a weakened Fitzroy side lacking key-players take on a hungry Pascoe Vale seeking for revenge against the side that Moreland defeated to essentially win the SFV title.

The match kicked off looking to be a battle of well-oiled tactical futsal, which it was if it wasn’t for minor mistakes in possession for the sides. Tyler Garner would find himself losing possession in the defence to allow Jake Besenyi to take the early lead, but it was Alejandro Gomez’s error in the attack that allowed Garner to run the court and fire his redemption goal to equalise. Andre Caro would then take the lead from outside the area, but Fitzroy grew stronger with Elias Parthimos firing a brace to allow his side be leading as we entered the second half.

The half kicked off with Gomez redeeming himself with a great assist to make Besenyi’s brace of goals as he tapped it in to equalise. It was a half of fantastic quality. Although Garner fired another quality goal passed the Pascoe keeper, Fitzroy just couldn’t contain Pascoe Vale as Gerardo Soto and ex-tiger Leo Kimpara both fired into the bottom left corner to stretch their lead. Caro also fired another goal of his own, but it was Garner and youngster Abed Chandab who kept Fitzroy in the game with a close range goal each. Their goals were merely consolation though, as Fabio Albuquerque fired a tap-in to be the difference between the sides, ending the game at 7-6 to Pascoe Vale.