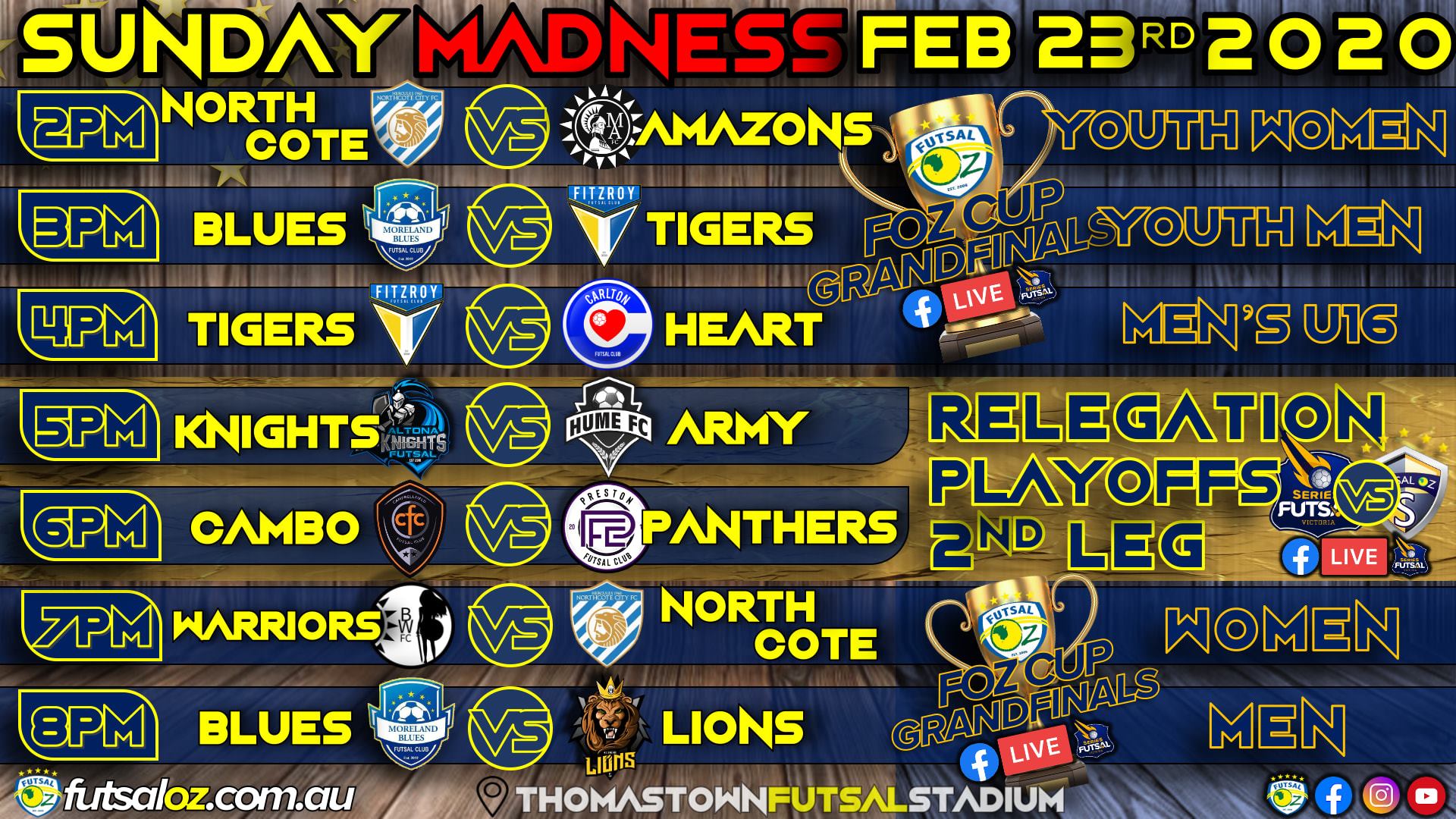 Our first game of the night was the youth womens FOz Cup Grand Final and pitted a strong Northcote side against a young Amazons who were hungry to overcome a tough opposition.

Our first half kicked off with Northcote on the strong foot as expected with Eleni Fakos and Monica Fonua scoring early.  Melissa Garcia would also get on the scoresheet but it was the Fakos show as she snatched a hattrick of goals to make it four to her name in the first half. It was a largely one-sided half which caused no doubts in who was running away with this one.

The second half saw Northcote only knock two more goals to make it 8 but found themselves keeping a clean sheet as they kept Amazons at 0 goals. One more goal to Fakos and Fonua each meant that the match finished 8-0 as Northcote ran away with it from the get-go.

Our next clash saw the youth SFV champions Moreland FC take on a strong Fitzroy side for the youth FOz Cup.

The first half was as close as expected with both sides pushing putting on quality defensive displays to keep eachother out. It was a great effort from both keepers, but Tyler Lewis was the stopper who saw his side concede first as Atay Ibrahim topped off a quality half with a fantastically placed goal from distance. In the closing of the half we were witnesses to a late, dangerous challenge from Lewis on Jose Filho which controversially only saw him get a yellow as the half-time whistle went at 1-0 to the blues.

The second half kicked off with Fitzroy on the strong foot as they equalised through Elias Parthimos and then took the lead with a very well placed toe-poke from Sinan Gluhak. Moreland would turn it on though as they equalised through Muhammed Temel from close range, and took the lead after a moment of brilliance from Karrar Hassany. The youngster skilfully beat his player and finished the play composedly to allow his side to lead. This goal was followed by another from Temel, and after Fitzroy were forced to utilise the fifth man tactic, the back of the net was found once more for Moreland through Omer Turkmen as the match finished at 5-2.

Next up saw the under 16 FOz Cup winner be decided between two of the strongest youth systems in Futsal Oz as Fitzroy and Carlton locked horns.

The clash was unpredictable and the tempo and momentum fluctuated between the sides in large portions of the match which allowed Carlton to take the early lead through fast-finishing from Sebastian Stinissen and Abdulbaari Hussein. The lead didn’t last though, as a first half hattrick for Elias Parthimos and a goal for Sinan Gluhak meant that Fitzroy were sitting pretty for the second half as they sat at 4-2.

The second half was a similar narrative as Parthimos and Gluhak both scored a goal each once again with Fitzroy running away with their first and only trophy for the evening. Although Carlton put on a respectable performance throughout the game, there were limited second half bright-spells for the heart as they failed to snatch another goal to their name, allowing the match to finish at 6-3 to Fitzroy.

Our next clash saw Altona and Hume clash in the second-leg of their SFV playoff fixture, where Altona will look to make more progress off their positive 2-1 aggregate lead.

Our first half was as competitive as the first leg, with both sides having their chances, but Hume edging the shots on target by a marginal effort. With Frano Saric once again being called upon by his Altona side, he definitely impressed, but unlike the first time these sides met he found himself conceding two first half goals. The goals came through Mehdi Ridha and Nejdett Sahin as they held momentum but it was one Altona free kick from Durim Cura that allowed the first half to finish 2-1 (3-3 aggregated) which kept this game tighter than ever.

The second half saw chaos ensue as Hume stole the lead back in emphatic fashion with Nejdett Sahin putting on a great performance. The Hume man scored a goal to make his brace as did teammate Mehdi Ridha which made for an extremely interesting finish to the match. With Altona breathing on Hume’s neck, consistently scoring to stay in reaching distance from their counterparts, it was a goal from Mark Saric that was considered crucial for his side. It was 5-4 to Hume with time running out, and with two seconds to go Frano Saric would find himself incredibly scoring the extremely late equaliser to take this game into extra time.

It was extremely tough to separate the sides as both clearly wanted their coveted spot in SFV. With Hume having a red carded goalkeeper therefore being forced to use a non-recognised stopper, the odds were against them. This was only proven further when Edison Ponari scored what would eventually be the winner from extremely close range. The sides were inseparable but ultimately the better team won emphatically, although nothing can be taken away from Hume’s respectable performances in both legs.

Our second playoff fixture for the night saw a Campbellfield side full of fresh faces take on a hungry Preston who would look to overturn a 9-6 aggregate deficit from the first leg.

It was a one-sided affair in the first half which matched the first leg well as Cambo struck more goals to add to the 9 they already had. Ubeyde Cicek scored early and celebrated loudly with confidence we haven’t see from him in recent fixtures since returning from injury which left spectators pleased to see. It was 10-6 but the misery piled on as Sofiane Soufi and Hayden Kanjo both scored. Kanjo’s goal came in humorous fashion as he dribbled up to the penalty area where he’d get brought down for a blatant foul, which only saw the ball dribble into the back of the net anyway. A successful penalty for James Ignatidis gave his side hope for the second half as we entered at 12-7.

The second half only saw Campbellfield exert their dominance further through multiple more goals, whilst also conceding three goals. Cambo found joy in piling the misery onto their opponents as Cicek notched his hattrick after a quality second half brace. Preston found goals through Jake Zomoya, Tony Makhoul and Kojo Brown but they were ultimately unnecessary as Billy Atik stole the show with two strikes from deep in his own half. The crowd made their voices heard for the fan-favourite as Cambo ran away with it, solidifying themselves as part of the 2020 SFV season.

Our second last match was the FOz Cup grand final for the women which pitted the two powerhouses of the division against eachother as Brunswick Warriors faced Northcote with all eyes on them.

It was a close half as predicted with Brunswick Warriors edging the scoring as they finished the half leading at 2-0. Quality goalkeeping was the highlight of the half as Christine Fonua and Iesha Atik both put on a shot-stopping clinic. It was Brunswick who’s efforts were ultimately rewarded though as Pam Demetriou and Lisa Fonua both struck to give their side the half-time lead. The second half was on its way and eyes were peeled as there was no telling what we’d see transpire in the conclusion of this clash.

It was an even tighter second half in comparison to the first, with only one goal splitting the sides as Brunswick Warriors finish this competitive clash with a 3-0 lead. They finished the match with a cleansheet and a brace to Lisa Fonua as Brunswick showed their strength and ability throughout the clash. The Warriors were crowned champions confidently as they were victors in a clean match-up with nothing but respect between the competitors.

Our last clash was the for the coveted Mens FOz Cup trophy as league winners Moreland FC faced bitter rivals Pascoe Vale in an unpredictable clash that was sure to get heated.

It was as intense and fiery as expected with both sides using physicality as a means to get in their opponents heads. It was an early Atay Ibrahim goal though that gave Moreland the lead as he ran down the wing powerfully and struck a great strike into the far-right corner. It was then Lucas Vaz who fired against his former club with a goal that was then followed by a Fabio Albuquerque tap-in to close the deficit. Cosimo Russo would then deny the Pascoe goal with a strike of his own to close the half as the crowd was clearly in support of the blues, making their voices heard loudly.

It was a second half of ridiculous proportions as both sides threw everything for the chance to win the title and it was a respectable performance from the lions as they found themselves getting back into the game passionately. A second half brace from Leo Kimpara and a goal for Alejandro Gomez allowed Pascoe to square things up, and it was just an Adam Cooper goal for Moreland that kept the blues alive whilst the lions chased them. Cosimo Russo would then score to take the lead with under two minutes to go, but the goal that truly got the crowd cheering was Jose Filho’s finish into an open net on the buzzer that saw the crowd lose their minds. ‘Pepe’ took his shirt off and celebrated in front of the Pascoe bench in ridiculous fashion. Moreland were crowned FOz Cup champions which added to their trophy collection for the season, which surely wouldn’t of sat well with bitter rivals Pascoe Vale who watched on.