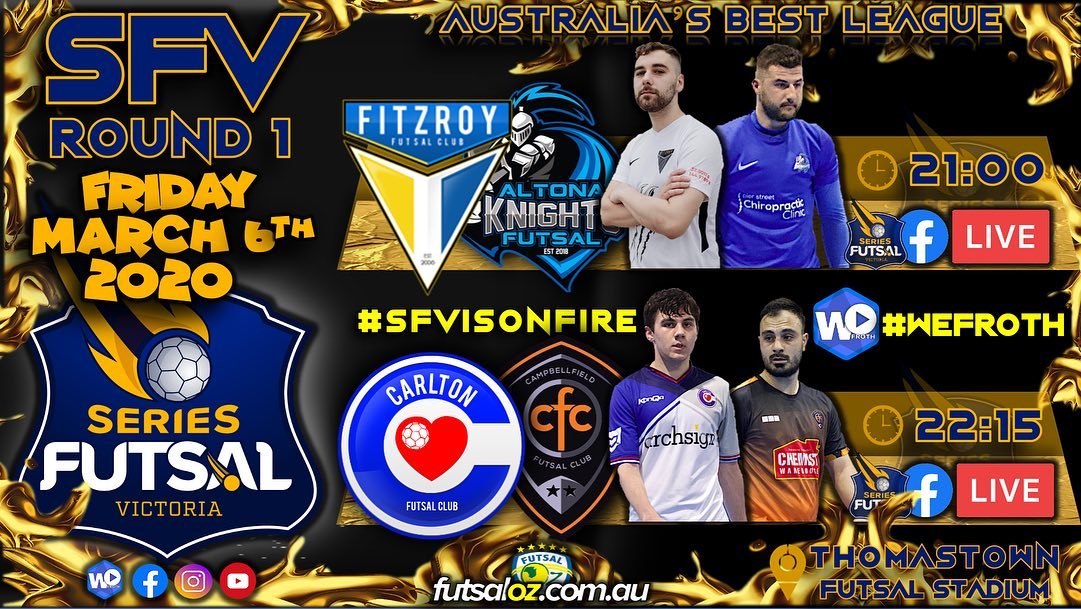 Our first game of the SFV matchday saw the beginning of two strong womens team’s seasons as Preston faced Pascoe Vale in an unpredictable fixture. Both sides were filled with depth but it was Andre Caro’s Lionesses that looked the stronger between the two due to absences from the Preston women.

The first half saw Pascoe Vale’s pressing be just too much for Preston as it finished 4-0. Goals were scored by Clarissa Allerton, Priscilla Ribes and Giuliana Pavia but it was Anita Caro Salve’s powerful strike from distance that took the cake for most impressive goal of the half. Pascoe Vale dominated from start to finish allowing any ideas of a comeback for Preston to be made redundant. It was 4-0 and Pascoe Vale would look to only stretch the lead further in the second half.

As predicted the second half only lead to further dominance by Pascoe Vale as they struck another 5 goals past a weak Preston side. Caro Salve scored the first goal of the half to make her second, and then struck later to complete her hattrick whilst Allerton also collected her second of the game. Two more goals from the lionesses came from Marcela Marques as she collected her first and last goals of the game, completing a commanding 9-0 victory.

The next match was tough to predict as both sides entered the match with strong squads. Although Northcote had their star-studded lineup, they lacked a substitute which meant they were forced to play out the entirety of the match.

Throughout the game spectators were treated to a clash of quality as Carlton were forced to defend for most of the match. It was their goalkeeper who put on a fantastic performance throughout the game, but she couldn’t stop the opening goals from Eleni Fakos and Laila Abdullatif as her side fell 2-0 early. It wasn’t all doom and gloom in the first half for Carlton though as they struck to halve the deficit through Alyson Pym.

The second half offered even more competitiveness then the first with Carlton’s keeper really kicking it into gear, making a number of saves to keep her side in the match. It was a late equalizer from Jessica Au with under a minute left that had the crowd roaring for her, as she struck from a side-ball into the top corner to emphatically make it 2-2. It seemed destined for penalties but it was Abdullatif who snatched her brace by scoring on the buzzer, creating an even louder atmosphere as the crowd erupted. She struck from range and it was a blunder from the Carlton keeper who will be disappointed as her great performance was hindered by an avoidable goal.

We kicked off our first men’s clash of the matchday with two of the most active sides in the transfer window, as Fitzroy and Altona tested their new talents against one another.

It was a half of intriguing series futsal as both sides were gunning for the opening round one win. Altona seemed more up for it in the beginning minutes as they struck almost immediately through a powerful Michael Lettini strike off of a side-ball pass, but it was the tigers main man Scott Rogan who denied the goal with an extraordinary finish of his own. He struck from the left flank and into the opposite top corner, rendering a strike even the great Frano Saric had no chance saving. Both sides were still competing fairly evenly still but it was another Rogan strike from outside the penalty area that allowed the Tigers to take the lead for the first time in the 2020 season. The half closed at 2-1 for the tigers creating plenty of intrigue for the second half.

The second half was must-see as the fans in attendance couldn’t take their eyes off of the competition in front of them. Both sides were having their chances, but it was an early second half goal from Lettini to make his brace and equalize emphatically. The game became even tighter with both sides struggling to break eachother down, but when they did it was Frano Saric and Peter Tamburrino who were both making it as hard as possible. The players on the court were pushing harder and harder but it was Fitzroy who would eventually retake the lead as Sinan Gluhak cleverly beat Saric exemplifying great skill and composure in front of goal. Although it remained tight, it was a great Tyler Garner strike into the opposite bottom corner that allowed the lead to be doubled, as the Tigers won a tough game 4-2 to begin their season on the strong foot.

Our last game of the evening was a clash that always provides as Carlton Heart flexed their new signing Lokmen Ramadan against a Campbellfield side who did the same with Enzo Marangoni.

It was an unmissable half of series futsal as both the competition got heated, furthering rivalries between Heart keeper Mazen Abdallah and the Campbellfield side. It began with Sofiane Soufi firing the opener, leading to him then celebrating in Abdallah’s face using absent teammate Henrique Pimenta’s signature ‘bow and arrow’ celebration. Carlton kept their composure though, as they fired an equaliser through Stephen Gustus from close range. It was then a Joshua Pulvirenti goal that fumbled through Billy Atik’s hands as the Heart took the lead emphatically to close the half at 2-1.

Carlton finished the first half strong and began the second similarly with Pulvirenti getting a goal to make his brace, whilst Thomas Natoli got his first after great passing from the Carlton team. It was 4-1 and Cambo were struggling to keep up with Carlton’s tempo and it didn’t help that Abdallah put on a quality performance between the sticks aswell. The minutes were winding down and Carlton were in the drivers seat as Campbellfield just couldn’t break them down. The match finished 5-1 as Chaaban Rajab closed the match with a finish into the open net as Campbellfield attempted to utilise the fifth man tactic and ultimately failed.