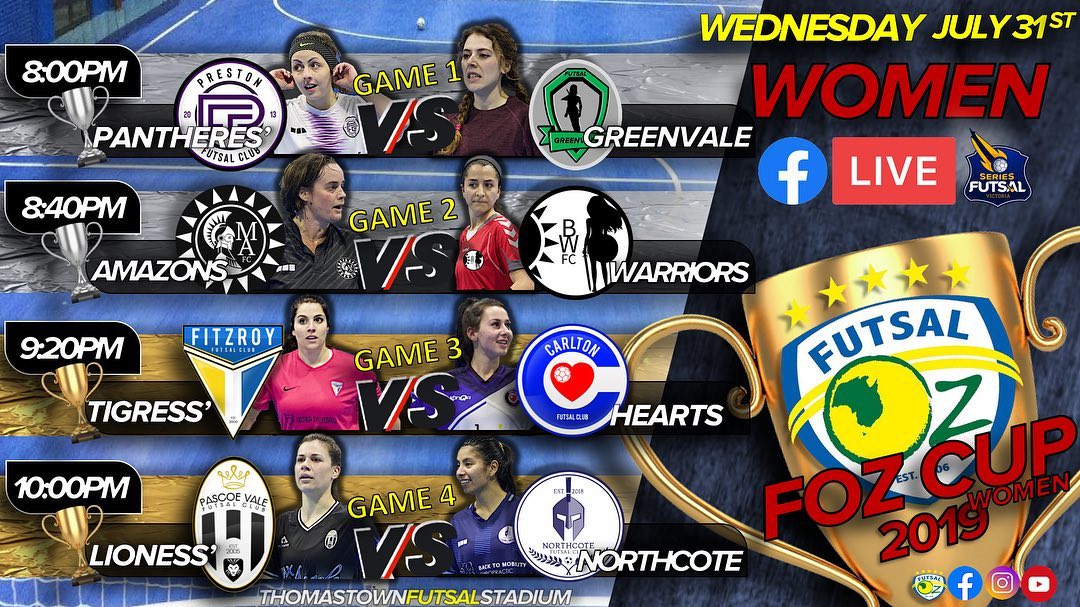 The opening game of the Silver Cup Semi Finals saw fifth placed Preston face bottom of the table Greenvale for a place in the Final. A strong first half from both sides saw Preston pull away late to build a handy 6-2 half time lead thanks to braces from Fetima Abou-Eid & Danica Petreska leading the Pantheress’ to a commanding half time lead.

The second half was more of the same as Preston would coast to a commanding win, with Abou-Eid and Janelle Rose Sammut both finishing with hat tricks, to help Preston through to the final where they will meet Melbourne Amazons or Brunswick Warriors.

Next up saw friendly rivals the Amazons take on the Warriors for a place in the final against Preston. A tight first half saw Amazons edge the scoring with goals from Attard, Bagang & Dupont all finding the net to build a 3-1 lead, while a Bianca Lee strike for Brunswick kept them in the contest at the break.

The second half was full of goals, but it was the Amazons who edged it taking home a tight 7-6 win with Attard finishing with a hat trick while Bagang & Dupont completed braces in the win to send the Amazons through to the final where they will face Preston for the Silver Cup.

The first of the Gold Cup Semi Finals saw league Champions Fitzroy face off against Carlton Heart. In what is usually a tight contest, it was Fitzroy who opened the scoring as Em Coppock found Dharma Georgi at the back post to tap home and give her side the lead. Carlton hit back soon after as a fantastic run from Stefanie Peluso saw her beat two players and find the back of the net to level the scores at one. Fitzroy had restored their lead when Georgi found some space and struck high into the net for a 2-1 advantage. Before the break Carlton were again level after an initial shot was saved from Rebecca Davies, before Ana Carolina finished off the rebound to level the scores at two at the break.

The second half began with both sides looking cautious not to concede the all important third goal of the game, but eventually Fitzroy would find it as Coppock found Georgia Cawley on the top of the area as she finished it off to again have Fitzroy ahead. The Tigeress’ then gave themselves some breathing space as Claudia Fruscalzo finished her one on one chance to all but seal the game, before a stunning strike from Davies from a corner set up a grand stand finish, but Carlton would fall just short as they pushed the Champions all the way, with Fitzroy progressing to the Final where they will meet the winner of Pascoe Vale & Northcote.

The final game of the night and second of the Semi Finals saw Pascoe Vale take on Northcote for a place in the final against Fitzroy. A tight first half saw both keepers on the top of their games as there were no goals to speak of in the first half, though both sides had plenty of chances.

The second half was much of the same, with both sides defending well and both keepers pulling off a number of fine saves. The deadlock was broken in the final eight minutes as Eleni Fakos was on hand to tap home at the back post which proved to be the only goal of the game as Northcote held on to progress to the final where they will meet Fitzroy.