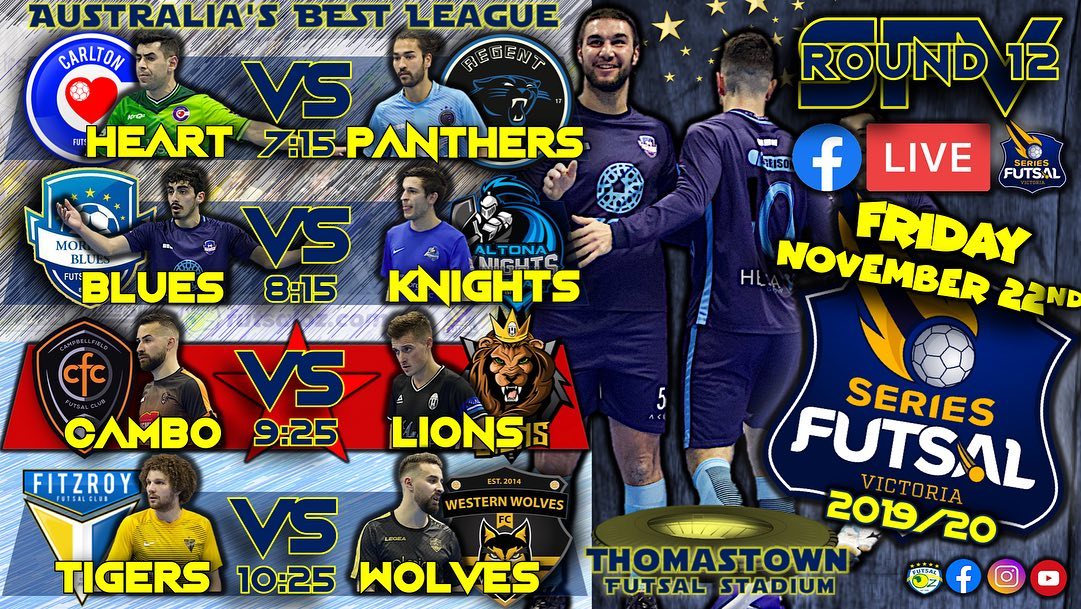 Our first clash of the night saw a hungry Regent side attempt to slow Carlton Heart down from climbing the ladder to regain their top three position.

The match opened up with Thomas Natoli having a quick impact as the new signing scored from the left flank. It was a half of sharp replies though, as Shuayb Abdulkadir replied quickly from a strike from the right wing. Ernie Simsek would soon have his say though taking the lead back from a strike off of a side ball layoff. Once again, Regent would reply quickly this time through a Shifa Ahmed thunderbolt from distance that smashed off the top corner. Muhamed Rahimi would then put his side infront for the first time of the game with a shot from outside the area, but it was Natoli who snatched his brace as he finished from extremely close range to equalise and close the half.

The second half kicked off with Joaquin Jimenez firing to take the lead back for Regent from the left wing. It was Shaf Ibrahim and Abdulkadir Mohamed who were composed in scoring their individual goals to stretch the lead to 6-3, and this one was set add to the narrative of the recent resurgence of Regent FC. It was Carlton’s job to shut them down though as Moe Matar struck a powerful volley to close the deficit. Marquee man Arturo Garzon Diaz placed a strike into the top corner to allow his side to gain momentum, and it was a tap-in from Abdirizak Ahmed against his former club that completed the comeback at 6-6. Both teams had put on a show for spectators but the match was destined for penalties.

All penalties were missed or saved but one in Shaf Ibrahim as he struck the only goal of the shootout to collect Regent’s second win of the season in emphatic fashion.

Our next fixture pitted a star-studded Moreland side with new signings in Felipe Bley and Jose Filho take on an Altona Knights side sitting in the relegation zone.

The match began as a tight affair as both teams fought hard for the opener, but it was the strong Moreland lineup that held majority of the attacks and possession. Muhamed Temel opened the scoring from the top of the penalty area with a strike into an open net and it was all Moreland from then on as new signing Felipe Bley barely had to make a save for the rest of the half. Another strike from Temel, this time on the right wing allowed him to collect his brace and double the lead to 2-0. This was complimented by Jose Filho’s goal from the left flank which was placed very precisely into the back of the net and allowed Moreland to enter the second half with a three goal lead.

The goals didn’t stop there for the equal league leaders as they struck through Cosimo Russo twice in the second half. Altona were down and out as Russo found himself finishing his brace into an open net from his own half. Felipe Bley also got on the scoresheet in similar fashion as he struck from his own penalty area into an open net as this one finished 6-0.

Our third match was a Campbellfield side desperate to shorten the gap to the top three from 6 points to 3 as they took on a Pascoe Vale side fresh out of losing to Moreland last round.

The first half of this unpredictable affair fittingly kicked off with both sides getting on the scoresheet early to make it 1-1. Kevin Dos Santos continued his blistering form by speeding down the ring wing beating two defenders and squaring Alejandro Gomez at the back post to make it 1-0 early. A strike which deflected of Thomas Brossard and passed Aaron Yu saw Campbellfield equalise almost immediately, but a goal from Behrad Behzadpour at the backpost meant Pascoe were back infront. The lead lasted the half and was extended further when Jason Barrientos attempted a backheel to Andre Caro which didn’t work as well as he wanted to, but it didn’t matter as the ball stayed in his reach allowing him to score from close range to close the half at 3-1 to the Lions.

Pascoe Vale continued their strong ways as they continued to put the pressure on a trailing Campbellfield side. The lions widened their lead with three goalscorers in Alison Lima, Joao Da Silva and Bahzadpour which allowed them to finish the match at 6-1. Behzadpour finished into an open net whilst Alison also struck from close range, but it was Da Silva’s goal from his own half that topped off a fantastic all-round performance from Pascoe Vale. The match didn’t lack controversy though as the referees and the Campbellfield players and staff found themselves in a verbal back-and-forth exchange throughout the last few minutes of the match.

Our last clash was a repeat of the two sides that provided us with a match of the season candidate earlier in the season when Western Wolves beat Fitzroy with under a second on the clock which involved plenty of controversy.

The action began early with Tyler Garner skilfully dribbling down the right wing, shooting and seeing his strike saved but only to land into the path of Scott Rogan’s for a header into the back of the net. Corey Sewell would then score from close range to prove his impact to the side, and a precise Adam El Hayek bottom corner strike saw Fitzroy lead 3-0 early. Scott Rogan would strike again from the backpost to make his brace, and a wonderful dribble around the opposition goalkeeper meant that he had made his hattrick. Tal Galper would also get on the scoresheet from close range as this half ended shockingly at 6-0 to the defending champions.

The half opened with Sewell collecting his brace almost immediately from metres out, but it was Hayden Kanjo who would steal the next goal to finally put his side on the scoreboard. Josh Allen and Sinan Gluhak would both fire two composed strikes to extend their goal tally to 9. Two more goals for Wolves through a Yusuf Karadad goal and a Kanjo wonder-strike from half would allow the trailing team to finish the game with some positivity but it ultimately meant nothing to the 9-3 scoreline. The match finished with plenty of controversy as Wolves’ staff were irate due to calls from the referees, which added to the intrigue for everyone in attendance.