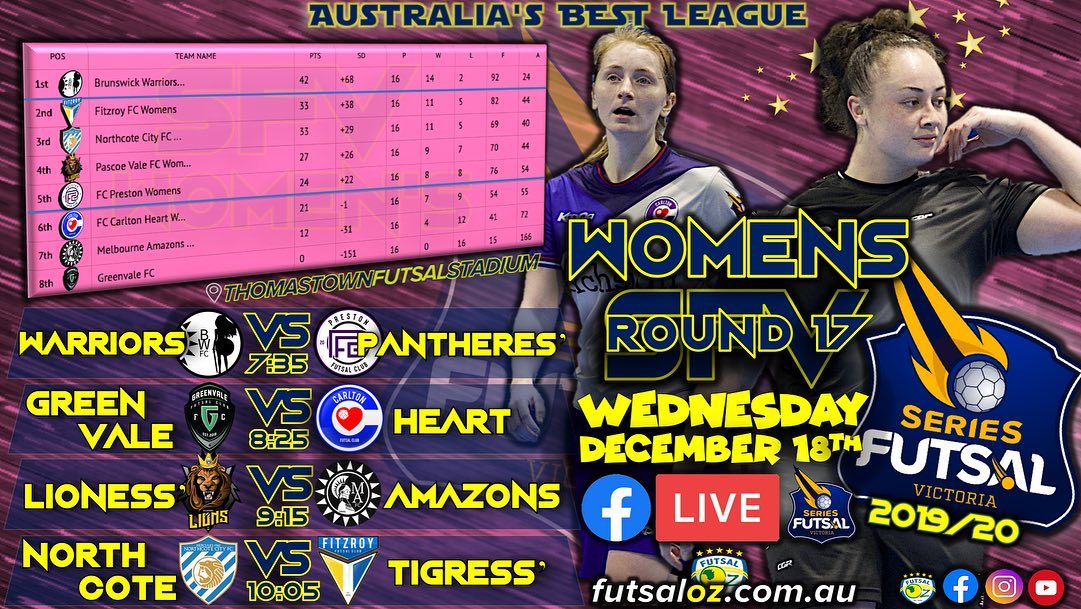 The opening game of the night saw Brunswick Warriors look to take another step towards the title as they took on a resurgent Preston. It was Preston who were causing headaches early as they got out to an early 2-0 lead thanks to goals from Sidney Allen and Elly Torre to put the league leaders on the back foot. Brunswick battled back into the game to ensure they were level by the break with goals from Lisa and Christine Fonua bring the Warriors back into the game.

The Warriors stepped it up a gear in the second half and put their opponents away as Lisa Fonua finished with a game high three goals, while Christine Fonua added to her first half strike and Daniella Galluccio bagged a second half brace to see the Warriors end 2019 at the top of the table.

Next up saw bottom placed Greenvale take on Carlton Heart. In what was expected to be a big win for the heart, they punished their opponents early, building an 11-0 half time lead with Alyson Pym & Rebecca Davies both bagging first half hat tricks, while Zoe Tizard and Mariella Bagang both netted braces to take the Heart into he break with an unassailable lead.

Greenvale would get a goal back to ensure they did not go hone empty handed thanks to a Lauren Gallina strike but that’s as good as it got for Greenvale as Pym struck twice more to finish with a game high five goals, while Bagang and Davies brought their tallies up to four for the game to see the Heart take home a massive win.

Next up saw Pascoe Vale face an in form Amazons. In what was a crucial game to their top four hopes, the Lioness’ built a handy 3-1 lead thanks to goals from Jess Byrne, Priscilla Ribas & Julie Tran, but the Amazons were going toe to toe with their higher placed opponents as they netted three of their own thanks to goals from Alycia Eickle, Zoe Schaffner & Alex Sinclair had us level at the break.

The second half began with the game in the balance before Pascoe took the lead again through a second from Julie Tran as they looked to push on for victory, but the Amazons were determined for a win as they drew level late on thanks a second Alex Sinclair goal to send the game to a shootout.

Pascoe would convert their first three penalties while Deidre Bugraaaf was the unlucky one to miss for the Amazons as Pascoe took away the points.

The final game of the night looked the game of the round on paper as third placed Northcote took on second placed Fitzroy. In what is always a close contest between the two, it was Fitzroy who took the lead early through an Ili Jakab strike, before Jakab struck again to double the Tigeress’ advantage. Northcote brought themselves level by the break as goals from Alana Cerne & Melissa Garcia ensured the game was in the balance at the break.

The second half saw the intensity rise as both sides were having chances to score, until Northcote took the lead for the first time through a second Alana Cerne strike, before a goal late on to Laila Abdullatif gave Northcote a two goal cushion in the dying stages. With two minutes to play Fitzroy pulled a goal back through Em Coppock, before late drama saw a frantic finish leading to another from Coppock to bring Fitzroy level and send the game to a shootout.