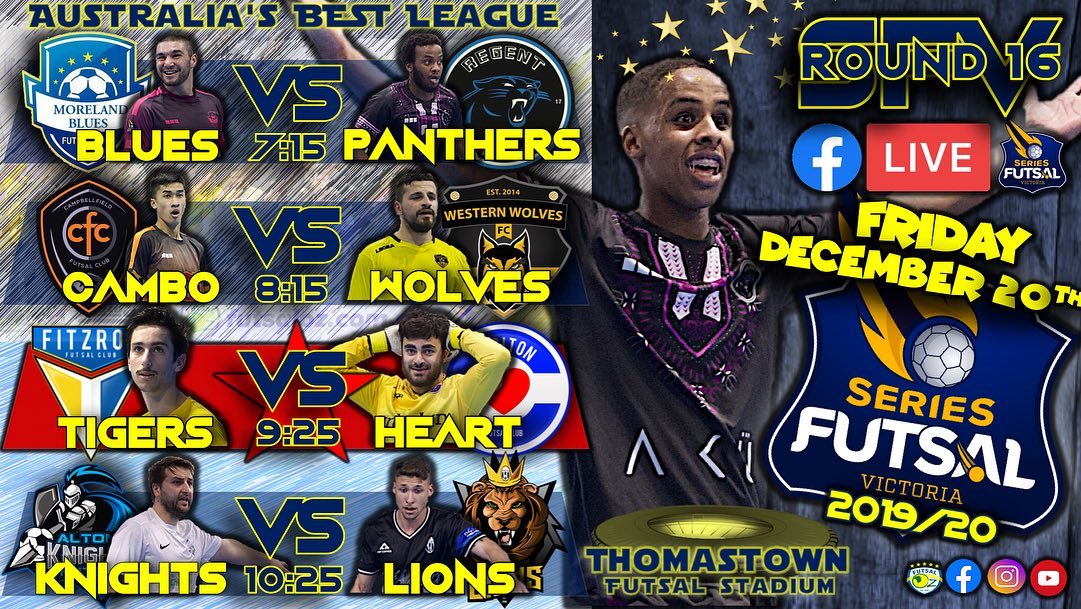 Our first match of the night provided a David vs goliath like fixture as the strong Moreland side faced an inform Regent hoping to get out of the relegation zone.

The first half saw Moreland take-off from the get-go as Atay Ibrahim finished confidently on the right flank to open the scoring. Cosimo Russo would pass the ball through the goalkeepers legs to double the lead, but it was Abdulkadir Mohamed who kept his side in it with a goal. Jose Filho would deny the Regent goal though as he fired one of his own on his unfavoured left foot to make it 3-1. More goals from Muhamed Temel, Ibrahim and Russo meant that the first half ended at 6-1 to Regent who had seen Shuayb Abdulkadir and coach Pizza sent off which added to their early demise.

Our second half only saw the domination further as Regent only managed to snatch one goal through Shifa Ahmed whilst conceding eight more. Two goals each from Filho and Adam Cooper, a single each for Rico Hauser, Ibrahim, Russo and Temel meant that this match finished at a staggering 14-2 to Moreland.

Our next fixture was an unpredictable one with Campbellfield and Western Wolves facing off in a match that was missing someone who could’ve acted as the potential decider; Henrique Pimenta due to suspension.

Our first half began as competitive as ever with both sides struggling to break the deadlock, but it was Wolves’ main man Hayden Kanjo who struck first blood with a left footed strike from the left flank. He doubled the lead with strike identical to the first, just slightly more impressive as he showed great precision and strength to get the shot off. A well-placed strike from Lokman Ramadan after fantastic dribbling and passing from __ meant that Wolves were taking this game into the second half at 3-0.

It was perhaps the most dramatic half of futsal we’ve seen in weeks as we witness comebacks, emphatic last minute winners and dramatic heated exchanges. We kicked off with a precise Dani Chaabani toepoke that allowed Campbellfield to gain momentum and it was Fabio Albuquerque that complimented the goal with one of his own from close range thanks to a Thomas Brossard assist. Cambo pushed themselves to the limit to equalise, but eventually did and dramatically with Fabio leaping into the air and heading the ball past the ever-so dominant Billy Atik. It took numerous attempts including penalty shots to break down Atik, but the game was finally all square. With both sides giing it their all, it was Wolves who equalised in the last minute which saw marvellous celebrations as Ramadans fantastic footwork allowed him to fire a deflected goal in.

Our third clash of the night pitted a firing Fitzroy side against a struggling Carlton Heart who found themselves in the relegation zone entering this match.

Our first half was quite competitive but their was one side more up for it then others, specifically one man in Josh Allen. Allen managed to grab a first half hattrick of clinical finished to put his side 3-0 up early. A long-shot that took a slight deflection and two finished on the right wing meant that Fitzroy could play confidently, but a close ranged goal from Abdirizak Ahmed just before the closure of the half meant that the competition was still well and truly alive.

The second half kicked off much like the first as after Ahmed ignited a comeback in the half previous, he found himself scoring from close-range again to close the deficit to 3-2. An unlucky Scott Rogan own goal allowed Carlton to equalise and it was a fantastic Chaaban Rajab finish from Ahmed’s lobbed assist which took Carlton into the lead. Elias Parthimos would strike twice though to equalise for his side from close range twice. Corey Sewell complimented his teammates brace with a fantastic finish of his own after a speedy 1-2 with Allen. The game wasn’t over yet though as ex-Fitzroy boy Harry Robotis dramatically struck two goals in quick succession to take the game into penalties, as he fired a brilliant shot off the crossbar and in, and struck low and hard under 30 seconds after his first.

The penalty shootout saw Scott Rogan, Tyler Garner and Corey Sewell all score their penalties to win it for Fitzroy.

Our last match of the matchday had Altona faced with a mountain to climb as they hoped to slow down league leaders Pascoe Vale whilst making an effort to escape the relegation zone themselves.

This match kicked off with Pascoe Vale on the strong foot as Alejandro Gomez found himself scoring off of Kevin Dos Santos’ well placed pass. He wasn’t done scoring though as he found himself embarrassingly passing the ball into his own net as he miss-predicted where Aaron Yu would be standing to receive the ball. Although Altona got their goal, Pascoe weren’t slowing down as well worked goals from Dos Santos and Lucas Kruel meant the second half was finishing at 3-1 to the league leaders.

The second half was a half of ridiculous proportions as Altona Knights dug deep to strike a number of goals passed an unexpected Pascoe Vale side. Mark Saric scored and Andelo Svalina headed home a goal to keep Altona alive. Joao Da Silva finished from close range to cancel out Altona’s efforts, but the match wasn’t over yet. One goal for Zois Galanopoulos meant that Altona were well and truly in it but it was Andre Caro who struck to make sure the game stayed at 5-4. Galanopoulos found the back of the net again from distance to equalise at 5-5, and it was Jurcic who scored emphatically to make it 6-5, but Kruel struck late to take the game into penalties.

Galanopoulos and Andre Caro both struck their penalties but it was Michael Lettini who was the decider that allowed Altona to shockingly defeat Pascoe Vale.